Australian Rockers AC/DC have delivered their best album in decades based on a sample of tracks from the upcoming Album “Black Ice”.
The songs – Anything Goes, War Machine, Stormy May Day, She Likes Rock N Roll, Money Made and Black Ice, along with the current single Rock N’ Roll Train – suggest the band has made a remarkable return to form after a series of fan-only albums in recent years.
Judging by these songs, the 15-track album is the band’s most consistent and accessible release since Back in Black. Anything Goes has the potential to be the band’s biggest hit since You Shook Me All Night Long if released as a second single. I do love to try to spot them and that’s my bet.
Opening with a guitar sound that recalls Bon Scott’s bagpipes in Long Way to the Top, Anything Goes is a delicious 1970s tune with blood-pumping, 2008 production values. The Young brothers would disagree, but it is the closest thing to a pop song the band has done and will pull in many new fans.
The songs heard today draw from periods throughout the band’s career :
Black Ice is a head-banging anthem from the For Those About to Rock era, with a riff as good as any the Youngs have written. War Machine is a hard and fast affair reminiscent of Back in Black’s Given The Dog a Bone. Money Made is a bass-heavy boogie with guitar chords that seem to hang back, teasing, before sling-shotting into a chorus from the Blow Up Your Video era. Stormy May Day offers something new – a huge over-driven slide guitar hook that is a favourite in the Alberts studio.
Producer Brendan O’Brien (Bruce Springsteen, Pearl Jam, The Offspring) and long-time AC/DC mixer Mike Fraser should take a major credit for the album, delivering a very contemporary sound – probably the best production value of any AC/DC album to date.
The vocals are one of the big surprises of the album. In a modern medical miracle, front man Brian Johnson’s vocal chords have patched themselves up to deliver his best vocal performance since the 1980s. O’Brien has also worked hard on the back-up vocals, which makes a tremendous difference in the choruses.
This is not Back in Black. It won’t sell the 40 million copies of the 1980 classic.
But on a first listen it is by far the best thing AC/DC has produced in a quarter of a century.

“Is your death wish stronger than you are?” Lucinda Williams asks in “Little Rock Star,” a cautionary song swathed in guitar noise that someone should play to Pete Doherty, Paul Gascoigne and Amy Winehouse right now. While it shows that the 55-year-old barbed-wire country singer is wary of rock’s trappings, Little Honey proves she’s still crushed out on the music. On “Real Love,” amid boogie-rock riffing, she alternately pledges her heart to a guy, a girl and an electric guitar. And “Honey Bee” ranks with Joe Liggins’ 1945 hit “The Honeydripper” as one of the nastiest erotic jams ever (“Now I got your honey,” she hollers, “all over my tummy!”). There are some throwaways: “Jailhouse Tears,” a honky-tonk trailer-trash bitch-fest, is play-acted too hard by Williams and guest Elvis Costello. But it’s useful comic relief between the slower burning numbers that — for all the rock thrills here — remain Williams’ most potent showcases. “If wishes were horses,” she moans on the sublime song of the same name, “I’d have a ranch.” Ride ’em, sister. 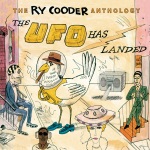 RY COODER – The UFO Has Landed – The Anthology

Visionary Grammy-winning guitar legend, composer, and producer Ry Cooder’s epic musical journey has explored the realms of rock, blues, country, folk, Hawaiian, Latin, Tuvan throat singing, jazz, and Tex-Mex to name a few. On ‘The UFO Has Landed’, Rhino celebrates four decades of his eclectic output with a 2-CD 34 track collection of his work as a solo artist, collaborator, and soundtrack composer. Spanning 38 years from Cooder’s self titled 1970 debut to his 2008 album ‘I, Flathead’, the anthology includes his most memorable selections as well as one previously unreleased track, Let’s Work Together.
Produced by Ry’s son, Joachim, this compilation offers a fresh look at Cooder’s musical career.. Along with his solo work, THE UFO HAS LANDED features selections from Cooder’s film soundtracks, including the slide-guitar based themes from Southern Comfort and Paris, Texas. 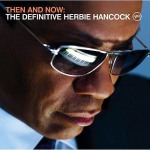 HERBIE HANCOCK- Then And Now : The Definitive

This carefully selected retrospective tries to cram in 40-odd years of innovation from one of jazz’s greatest instrumentalists, keyboard maestro extraordinaire, Mr Herbie Hancock. From starting out in the late 50s, through the cool 60s, the funky 70s, the emergence of hiphop in the 80s and beyond it’s a tall order, but Then And Now doesn’t aim to be comprehensive. Instead, it skims the highlights, pulling from Hancock’s early Blue Note solo outings (Maiden Voyage, Cantaloupe Island) through to his Joni Mitchell tribute, River. In between are funk/fusion workouts including the eternally groovy Chameleon, my own personal favourite track from arguably his best and most important album, Headhunters, and early B-boy electro-groove : the incredible Rockit, here presented in live form. The compilers might have swapped out Hancock’s jazzy cover of Nirvana’s “All Apologies” for one of his many sparkling originals, but this is a hits set, and those looking for a roundup of Hancock’s best-known recordings will find Then And Now fits the bill. If you don’t think you know who he is, buy this and realise you do, then get Headhunters and Maiden Voyage.
Timeless classics from an immortal artist.

Oh dear.
Remember the “duet” between Natalie and Nat “King” Cole a few years ago? Well, take that and multiply it tenfold and you get Elvis’ Christmas Duets … but it’s so bad it’s actually worth getting. Seriously. And I hate seasonal albums with a passion …
Mostly featuring American country artists, some of the stars curling their lips and wiggling their hips include LeAnne Rimes, Wynonna Judd, Carrie Underwood, Martina McBride and – quite bizarrely – Olivia Newton-John. You’ll know some of them and most of the songs too, but for sheer yuletide comedy value, this has to be right up there with the James Brown album in the same vein from the mid-60s. Awesome! I hate it but I love it …