There was a lot more at stake than just the Ted Bates Trophy in this prestigious friendly between Southampton and one of the top sides in Europe on an icy evening in January. Pride would play a part too, seeing as Bayern Munich are not just German opposition but were also European champions just three years ago. The new memorial to one of Saints’ greatest sons is to be a regular event at St.Marys in years to come, usually taking part in the last pre-season friendly every summer against one of the best teams in the world. The match itself was arranged to fill a gap in Saints’ fixture schedule and to prepare FC Bayern for the resumption of their own league after the traditional six-week mid-season break in the Bundesliga.

With very little publicity for this deliciously enticing encounter, I was amazed that it was all but a full house, especially given that arctic weather had been creeping steadily in. But with the squad the Germans were sending over and the very reasonably priced tickets that were on offer, I’m pleased there was such a great turnout. Any kids that got in for a pound would have seen a completely different ball game to that usually on offer in the Premiership, even if half of them were marched around the pitch while the game kicked off, as stewards sought to find them all a seat.

Despite losing the Germany keeper Oliver Kahn (thigh) in the warm-up and France’s Bixente Lizarazu (flu) on the morning of the match, the team was very impressive indeed. Just to be able to watch international stars like Germany’s Michael Ballack and Jens Jeremies, Brazil’s Ze Roberto, Croatia’s Salihamidzic as well as our own Owen Hargreaves and Europe’s Golden Boot winner last year, Holland’s Roy Makaay, was a joy.

Saints’ line-up was an unusual mix of youth and experience with a debut for Folly, Kenton making the switch to left-back and Ormerod partnering Jo Tessem up front, while Anders Svensson was given a chance to shine in midfield.

The match itself got off to a lively start when Niemi made a typically memorable save from a snapshot Makaay volley in the first few moments. Ormerod then shocked the travelling Bayern fans by slotting home a Tessem knockdown from six yards after seven minutes. The crowd went wild after a split second pause as nobody could quite believe that Saints could be 1-0 up so quickly in the game, plus it was chilly and we were all trying to keep warm, you know ?

The rest of the half didn’t really amount to anything too notable, other than the touch and movement of the Bayern players. Technically, every single one of them was comfortable on the ball, even the centre-backs who certainly weren’t afraid to dribble over the halfway line on their own. The time they seem to have on the ball is always evident, and they just look calm as they stroke it around, waiting, probing, waiting for the right opening. I love to watch teams from other countries just to see how they do things and though I also love the hustle and bustle of the English game, you can’t help but admire the basic skills of continental footballers. If you keep the ball, the other team won’t score: it’s really as simple as that. The only British teams I can remember playing like that are Liverpool in their pomp in the 70s and 80s, and Leeds United under Don Revie.

However the problem can be that if you’re a goal behind it’s no good just moving back and forward, left to right, waiting and hoping: there has to be some penetration at some point and in England the crowds are not so patient as abroad and would get on the team’s back if they tried it here. As it was, the crowd was unnaturally quiet for the rest of the first half. Saints should have had another shortly before the break when Anders Svensson set up Neil McCann who sent in a wicked cross for Ormerod to head over, unchallenged, from six yards when it looked easier to score.

With Ballack starting to take more of a hold on the game in the second half, things were looking better for Bayern. Hargreaves was having a good game, playing energetically in Beckham’s England position on the right side of midfield, spraying diagonal balls in behind the Saints full-backs for Makaay and Ze Roberto to chase. They were starting to become more effective and looked like they might actually be playing in a proper match now, rather than just a training exercise. For Saints, Ormerod – as ever – was tirelessly chasing anything that moved, Michael Svensson was doing his best to contain the German onslaught before being replaced by the increasingly impressive Fitz Hall, while Anders was having a decent game in midfield, pulling strings and making chances for the rather out-of-sorts Tessem, replaced after fifty five minutes by James Beattie.

Before the England man could have any influence, Ballack sent a warning shot just over from the edge of the area, having been supplied by the lively Salihamidzic down the left. Those two players particularly impressed me on the night, along with Hargreaves and Ze Roberto, and it was the latter that finally put Ballack in for the equaliser on an hour, with a really well-taken low, hard shot with the outside of his boot into the bottom corner from just outside the area. The crowd went absolutely silent …

It’s so weird when there’s so few opposition fans. I’d guess about a hundred travelled – and fair play to them, given the distance and the weather in Germany – but it’s almost surreal when there’s no explosion of noise from the other end of the ground. Still, Bayern deserved their goal and it was well executed and efficient … just as you’d expect anything to be from Germany.

It was at this point that one James Beattie chose to remind us he was on the pitch with absolutely stonking piledriver from fully thirty yards: can that guy hit a ball or what ? The keeper only just saw it coming and somehow managed to contrive to get a fingernail on it and push it onto the corner of bar and post where it rattled most satisfactorily before bouncing … down and out, most unsatisfactorily. That would have been some goal to savour, especially as it was barely a minute after Ballack clawed one back. 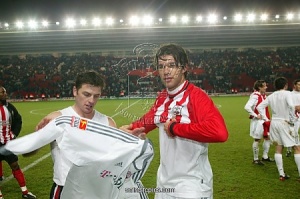 There were few highlights left in the match from a footballing perspective. McCann and Beattie were lucky not to get booked for minor fracas with the opposition as a few meaty challenges went flying in from both sides, but it was all handbags really. 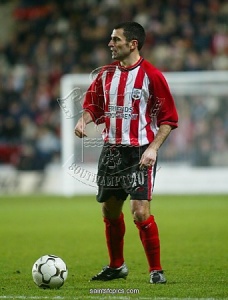 The best part of the whole match came with five minutes left when Kenton was replaced by local living legend, Francis Benali. The crowd threatened to blow the roof off! What a reception for one of the nicest guys in football. And what a lovely gesture from Strachan. having decided to retire completely from the game to concentrate on his business interests, Franny relished this last hurrah and promptly cleared an effort off the line, before spanking the ball into row Z – twice. In these heady times for pro-footballers, and in the light of all the off-the-field shenanigans going on with the likes of Rio Ferdinand, Jody Morris, Leeds United, Chelsea and Wayne Rooney hogging the headlines for all the wrong reasons, not to mention Alex Ferguson and his horse, here was a good football story about  a local lad done good. There’s not many left like Franny. Nor Strachan, come to that. I just hope he’s given as warm a farewell as his longest-serving player. And in front of a packed house too.