The “stopper” centre-half. The no-nonsense defender. The man to hoof it into row Z and beyond. The hatchet man. The blood and thunder merchant. The last ditch, even if it means a red card, take-one-for-the-team kinda guy …
John Terry, Marco Materazzi, Tony Adams, Terry Butcher, Norman Hunter, Claudio Gentile, Wille Young, Ron “Chopper” Harris … the list goes on.

Every team needs one, either in defence or as an anchorman in midfield (think Graeme Souness, Vinnie Jones or Gennaro Gattuso at their snarling worst) and some teams even have both.
Operating as a kind of “good cop, bad cop” duo with a silky-skilled ball-playing centre-back, when one went for the header, the other would sweep, while if one of them marauded forward for a set piece, the other would stay back. Like most successful partnerships, sometimes the communication was almost telepathic.
England enjoyed such a team within the team for a brief – but ultimately productive – period when they won the World Cup in 1966, with few pairings in history matching the peerless Bobby Moore and the steely Jack Charlton. The British, the Italians, the Argentinians and the Spanish have always produced these dogs of war, while the likes of Germany, Brazil and Holland have usually relied more on skill than brute force.
But, as Chopper Harris would probably be able to demonstrate, there are many ways to skin a cat … even in football boots!

Like many of the players I’ve talked about in these Top 4 lists, Bergomi was equally adept in more than one position, in his case both right back and centre-half. An out-and-out defender in the classic, old school Italian vein, he followed on from such luminaries as Giacinto Facchetti, Cesare Maldini, and Claudio Gentile, personifying the “Thou shall not pass!” attitude that has pervaded Italian football for over a century.

Bergomi enjoyed a rich and long-lasting career with Internazionale, making  over 500 league appearances in his twenty years at the club, whilst also appearing 81 times for Italy in a 16-year international spell. During that time he appeared in four World Cups – winning the trophy in 1982 – and the 1988 European Championship, while domestically winning just the one league title in an era dominated by city rivals AC Milan and Juventus. Inter proved fearsome opposition in the UEFA Cup during his time at the club though winning the tournament three times, in 1991, 1994 and 1998.
A tall, rangy player with energy to burn, Bergomi was an incredibly disciplined individual who kept in superb shape right up until his retirement at the age of 36.
Until the emergence of a certain Paolo Maldini, he held the record for most appearances by an Italian in European club competition and also for playing in the most Milan derbies. He also sported a rather nifty moustache/mono-brow combo from a very young age …
.

Had it not been for injuries, Alessandro Nesta may well have featured further up this list. Given that he made his name in an era that encompassed the likes of Franco Baresi, Paolo Maldini, Alessandro Costacurta and Fabio Cannavaro, the fact that he’s made it at all is testament to his outstanding ability.
Equally adept as the ball-player or the stopper in a defensive partnership, Nesta had it all: technique, pace, aerial ability and the vision to both read the game and turn defence into attack.
After starting out at boyhood club Lazio, he enjoyed a strong decade with AC Milan, winning both the European Cup and the Scudetto twice as well as an Italian Cup and a World Club Championship. His international career was rather more stop-start as the injuries began to take their toll. He watched from the bench in 2006 as his compatriots lifted the World Cup in Germany, and didn’t enjoy the best of times in the 2002 tournament either, injury keeping him out of the side after the group stages.
Nevertheless, he was never less than solid as a rock when he was on the pitch and was a born leader to boot. His tackling was superb, perhaps the best of anyone nominated in the back four lists, and weirdly enough he is still playing as I write this, enjoying an Indian summer in the MLS, with Montreal Impact.
They say you’re a long time retired so more power to you, Alessandro !

Coming from an illustrious sporting family featuring not just brother Bobby, but also the various Milburns, including Newcastle legend Jackie, John “Jack” Charlton nearly missed out on becoming a footballer altogether after applying to join the police force. With an amateur match being played at the same time as the interview, our man chose the ball over the truncheon and, as luck would have it, was scouted by Leeds United who offered him an apprenticeship shortly afterwards. The ensuing years saw Charlton clash with all and sundry and he famously kept a little black book in order to exact revenge on anyone foolhardy enough to cross swords with him on a football field. He nearly left Leeds following one notorious argument with manager Don Revie, but they managed to patch things up and he went on to become the defensive lynchpin and a key member of one of the greatest club sides of all time.

A late call-up for England saw him drafted into the squad only a year before the 1966 tournament was due to kick off. Despite pushing 30, Charlton impressed Sir Alf Ramsey enough to warrant his retention in the side alongside Bobby Moore and together they forged one of the greatest – albeit fairly short-lived – defensive partnerships ever seen in world football.
Still the record appearance holder for Leeds United – one ahead of Billy Bremner, with 772 – Charlton was also a prolific scorer, averaging better than a goal every nine games which is some feat for a centre-half. His heading ability is legendary, as is his lunging tackling, while his blood and guts, do or die attitude to everything in life took him far beyond his excellent playing career. A legend in Ireland, he single-handedly turned the country from a footballing backwater into genuine contenders on the world stage by exploiting FIFA’s “grandmother rule”. By enlisting English and Scots players just below the level of “England-class” (how funny is that now, by the way?) and motivating them to insane levels of pride for their new nation, The Republic took the USA by storm after beating Italy 1-0 in Boston one balmy summer afternoon in 1994. The national side had never enjoyed such a high profile before and even now, he never need put his hand in his pocket when in Dublin … 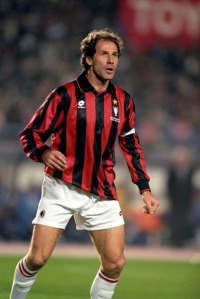 If football was a gangster movie, Franco Baresi would be the godfather.
The daddy of the modern mobile defender he epitomises the steel foot in a steel boot approach taken by the best Italian defenders down the years.
But he could also play a bit, too.
Even more able to combine the sweeper and the stopper role than compatriot Alessandro Nesta, whom he preceded in the national side for many years, Baresi took it as a personal insult if anyone got past him let alone scored. Such was his fervour to keep a clean sheet, his discipline and organisation spread to anyone who played alongside him making both Italy and AC Milan nigh on impossible to beat for well over a decade. Particularly for the Rossoneri, his long run in the side as captain alongside the likes of Maldini, Gullit, Van Basten and Rijkaard was a glorious, golden era in which they seemed to win everything every year.
In reality, the trophy haul was slightly less stellar than that, but the club still amassed six league titles, four Italian Cups, three European Cups, three Super Cups and two International Club Cups during his twenty years at the San Siro.
While he did actually win a World Cup winner’s medal with Italy in 1982, the fact he never played a minute of the tournament due to Scirea and Gentile’s seniority in the squad drove him on to try even harder when he finally played in the 1990 tournament at the grand old age of 30. After gamefully finishing third, a lesser player may have hung up his boots to give someone younger a chance, yet Baresi was no lesser player. Indeed, he captained the side at USA ’94 but they ultimately lost in the final to a decent but beatable Brazil side. Baresi missed a penalty in the lottery of the shoot-out that decided both the match and the whole tournament but had an outstanding final, the highlights of which you can see here.
But we don’t want to think about that now … just remember him as one of the greatest defenders of all time: Sig. Franco Baresi, 5’ 9” of Italian granite and AC Milan Player of the Century, one of a handful of elite players to have three World Cup medals for finishing 1st, 2nd and 3rd. 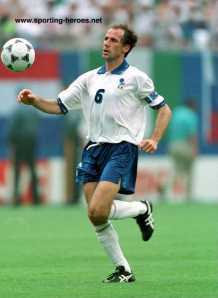 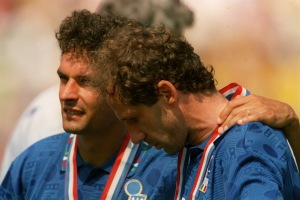