Sometimes the old adage about sequels being worse than the original just doesn’t hold water: Aliens, The Empire Strikes Back and Terminator 2 are all at least as good as – and some would argue way better – than the first films in their respective series.
With Mad Max Fury Road the superiority of the new compared to the old is like no other franchise ever made …

Never a fan of the originals, I just couldn’t see the attraction, even more so having recently revisited all three.
They weren’t just laughably low budget with a forest of wooden actors, they were also uniquely camp, outrageously macho and misogynistic, completely devoid of any form of character development or back story for the world in which they take place, and – on top of everything – the scripts, editing, photography and soundtrack were all sub-“happy slapper” video quality.
There have been some great independent movies to emerge from down under : Crocodile Dundee was a massive hit, while slightly less successful but equally amusing, Bad Taste – Peter Jackson’s debut – has gained cult status over the years, especially since the blockbusting LOTR series was released; but I wouldn’t put the Mad Max trilogy anywhere near those two films.

Enough of the old. What of the new ?

The first five minutes sets the scene: the old car from Road Warrior sits atop a dusty hill as our anti-hero surveys the landscape below him before roaring off across the desert, a lovingly familiar close-up of the over-sized engine churning its gears on the bonnet as it pulls away … 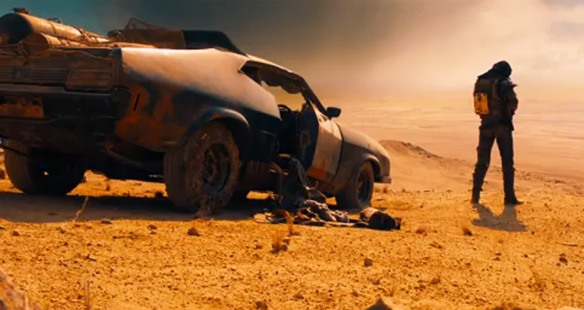 There’s a lot of thought gone into this picture, with loads of little details throughout that act less as a nod to the past and more as an out-and-out homage. Somehow, it cherry-picks just enough of the more iconic features and uses them to garnish what is a wholly original new story .. and not new just in the sense that the plot – yes, there is one – is actually quite detailed and (almost) believable. You get more sense of what’s going on in this crazy post-apocalypse world in the first half hour than you do in all of the previous films put together, plus there’s some real characterisation, none more so than with the strong female lead, Furiosa, played by Charlize Theron.
It’s been stated elsewhere that Fury Road is actually a feminist movie and in many ways I’d say that’s an accurate assessment … if you don’t mind your women being more Boudica than Barbie, anyway. There’s no obvious “eye candy” for perving men like there was in the originals – if anything, it’s the other way around with plenty of manflesh on offer in every scene.
Without giving anything away, the plot itself revolves around Furiosa’s personal journey – both in a literal and a figurative sense – as she attempts to wrest control of her own destiny. Max just happens to pitch up in the middle of it all, himself completely unable to exert any influence over his own life by the time the two of them meet. 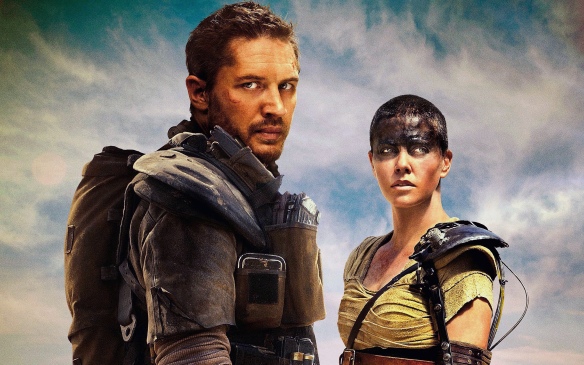 At the heart of the movie is the classic power struggle between a dictator and his subjects: one controlling resources – in this case, water – the other begging for more …
There are obvious layers of allegory in the film: the second world war, the civil rights movement, the break-up of the Soviet Union,  – but then it’s a simple story, ages old, being retold in the future.
Water isn’t the only thing in short supply: fuel and ammunition are high on the agenda, while human lives – women, babies and breastmilk in particular – are also right up there.
If that sounds a bit melodramatic, well .. this is Mad Max, after all.
Nothing ordinary happens in Maxworld.

Once the initial stage has been set, so the chase begins, for it is a chase … like an absurd, overlong episode of Wacky Races writ large, this gigantic cartoon of an action movie surges forward with relentless abandon, leaving the dead in its wake …
The sense of space is incredible at times: the vastness of the desert almost overwhelming, so bleak is its nature, so eternal is the glare of the sun.
But it’s also a highly claustrophobic movie in many ways: there’s lots of crawlspaces, rat runs and secret compartments throughout, let alone the “open claustrophobia” of being in the cabin of a vehicle moving at breakneck speed across a harsh and deadly landscape: step off and you’re doomed.
There are no set pieces like with most action pictures: no lorry off the side of a cliff or helicopter flying through a tumbling skyscraper – the entire movie is one giant set piece in itself, with the “war rig” being the jewel in the crown. With two massive engines and a payload of milk, the mission is to trade the tanker’s contents for gasoline and bullets .. but things don’t quite work out like that. Furiosa has her own agenda : and she’s not alone.

Strapped to a chase-vehicle as a blood donor for its recuperating driver, Max himself has no choice but to go along for the ride, a chain-linked artery connecting his own body to that of the war boy Nux – played maniacally by Nic Hoult – behind the wheel. In an armada of automobiles, his is the one leading the pursuit, like Captain Caveman on speed …

Unfortunately, that’s as far as I can go with the plot without giving away spoilers.
What I can say is this is an action movie like no other.
Yes, there are strong female characters in the Fast franchise, but they don’t actually steal the show – the cars do that.
Yes, there are strong female characters in the Alien franchise, but they don’t hog the limelight – the monsters do that.
The thing is though, it’s so subtle it hardly even matters. Max is with them and he’s a walking testosterone pump, so who cares ? The story is beautifully crafted, focusing more on the plight of a people than any one individual, and the action so all-consuming that who did what when rarely matters: there’s good guys and there’s bad guys. That’s all you need to know. It doesn’t matter what sex anybody is. It’s only the last couple of days I read about the feminist angle anyway, as I generally don’t read reviews before seeing a movie, but these were front page headlines and difficult to avoid.
Men will love this picture.
Women will love this picture.
You will love this picture.

… and that’s all that matters.