Amy Schumer plays Amy, one of two daughters from a broken home who had it drilled into them from an early age by their father that monogamy just doesn’t work. At the time, he was about to divorce their mother and was a serial womaniser. He likened the whole situation to only having one toy to play with for the rest of your life … and who would want that ?
Fast forward twenty years and while her sister has settled down into “normal” family life, Amy is carving out a career as a journalist for a lads’ mag while literally taking her work home with her by testing out every article personally along the way.
She has a rule that she never “sleeps over” with any of her conquests, sloping off into the night .. just like men do.
She drinks herself silly to the point she throws up only to return to the bar and order another round .. just like men do.
After twenty minutes of being hit over the head with this kind of thing, you understand.
After the opening five minutes, you understood, but let’s hammer it home a little longer, just to make the point … this is Hollywood, remember ? 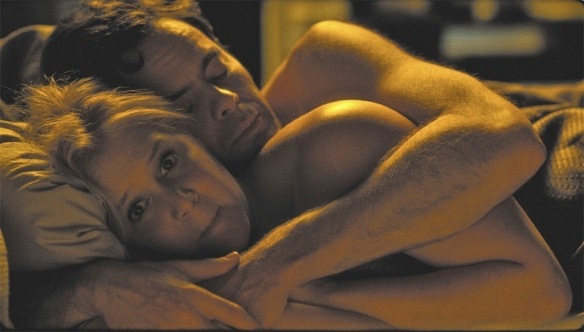 Trainwreck is on the one hand a traditional American comedy, with the usual slew of drinking, farting and poop gags. On the other, it’s a woman who’s the eponymous walking disaster the title suggests. If you take the movie at face value and just rate it for being a comedy, it’s distinctly average.
And that’s being generous.
If you bias the review bearing in mind it’s unusual for the (high-heeled) boot to be on the other foot, it’s still only so-so, but originality means it scores slightly higher.
Which is wrong.
As a man, this is a tricky one to call.
The film has been labelled a “feminist comedy”, but it’s not: it’s a comedy written by and starring a woman. That’s it. Nothing more.
In fact, rather than standing up for women in any political sense, if anything Amy Schumer is sending women up. Yes, she’s saying that it’s okay for women to drink till they fall over and sleep with as many men as they like: men do it, so why shouldn’t women ?
So if it’s equality you’re after, you’ve got it.
That doesn’t inherently make Trainwreck a good movie, though.

Of course, there has to be a love interest, right ? A moment where Amy is shot through the heart by Cupid’s arrow and she falls head over heels in love with a handsome leading man who sweeps her off her .. oh no, wait. That’s not gonna happen in this movie, is it ?
Well, actually .. yes it is .. and that’s no spoiler for anyone who’s seen the trailer.
It’s the way it’s handled that makes the difference. She doesn’t understand. Poor little Amy. How can she become attached to someone after all these years of ridiculing her sister’s family unit ? She’s not gonna join them and become a zombie mom like everybody else, is she ? Well, you’ll have to watch the movie to find out …

I have to say Trainwreck disappointed me. It’s very disjointed and feels like a number of set-piece scenes edited together, almost like one of those full-length features made up from bits of a TV show that used to be made in the 60s and 70s to launch US series into new territories like Britain and Europe.
Some sections of the story – mainly the bits where Amy has to behave like a normal person, rather than any of the booze/sex scenes – are deliberately stilted to show she doesn’t fit in. Yet, some of them end abruptly and for no good reason.
This is NOT for comedic effect: this is poor plot development and bad writing. It’s very jarring and makes you cringe for the wrong reason, when you really should be cringing for Amy and what’s happening in the story.
It actually reminded me of watching an episode of Monty Python, in that you remember all the greatest hits, the big sketches that everyone loves, but when you watch an entire show from start to finish, you have to sit through all the bits that didn’t work. There’s a lot of dross before you get to the good part. Sure, you can make an excellent hour-long highlights programme from one series, but the rest of the stuff is awkward and doesn’t work. And so it is with this movie: the trailer makes it look way better than it is and ruins the film because you know what’s coming from seeing it beforehand.
Trainwreck isn’t terrible. I did laugh out loud several times. LeBron James steals every single scene he’s in and Tilda Swinton is an absolute riot – and completely unrecognisable – as the magazine editor and Amy’s ruthless, tactless boss. But for the most part, it’s a gross, cringe-inducing procession of gags and situations that you can see a mile off.
In short, it’s a forgettable comedy that’s garnered higher than usual levels of publicity for being from a female point of view.