Gentle comedy-drama focusing on a senior citizen internship which plays on both ageism and sexism in the workplace, starring Robert De Niro, Anne Hathaway and Rene Russo.

This movie garnered a whole host of bad press even before it hit the screens, mainly because Robert De Niro stormed out of an interview with a Guardian journalist who accused him of being on autopilot in a film like this. The interesting thing about that is not that he walked out – he’s done that several times in the past and is well known for answering questions as monosyllabically as possible, especially if the response can be a simple “Yes” or “No”. It’s more because in The Intern he’s actually playing a very cool, calm and collected man who’s had a lot to deal with and a lot of time to think about it all.
He’s just not over-acting like he normally does in a comedy flick.
If anything, he’s under-acting ..

As worldy-wise Ben Whittaker, De Niro is about as far removed from his roles in the Fockers and Analyze movies as is humanly possible. Instead of maniacally hamming it up like a gurning control freak, in this movie he plays a much more normal, everyman character. A family man who recently lost his wife of 42 years .. his soul mate .. his best friend.
Now 70, he’s tired of golf and travelling the world just to get away from the marital home. He needs something to occupy his time and – most importantly – his mind.
Always in his local coffee shop by half seven with the newspaper, he still feels he can contribute to the world but doesn’t know where to begin until he sees a flyer advertising the senior internship scheme run by the local dot com sensation, clothing company About The Fit, and decides to apply. The application is to take the form of a short movie file, rather than a regular CV and covering letter, which is designed to weed out those uncomfortable with modern technology. Though at first he doesn’t know his Avi from his Mpeg, Ben nevertheless perseveres with it all and soon enough sends off his entry and is subsequently invited for informal interviews with some of the staff. 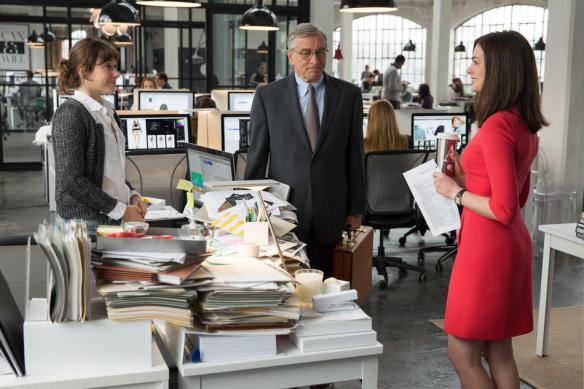 Overseeing the operation is founder Jules Ostin (Anne Hathaway) who is notoriously difficult to work with but who cares deeply for the empire she’s built from scratch in little over a year.
There’s plenty of comedy to be mined in the workplace, now more so than ever given the fluidity of modern business methods. About The Fit is one of those funky, laid back companies where staff where what they like, there are no walls and no idea too wacky it can’t be shared with everyone. If it’s a good one, you might even get to ring the old fire-truck bell hanging in the middle of the floor in their converted factory unit in downtown Brooklyn.
The obvious gags about age, gender, role reversal and old people vs. technology are touched upon, but this is one of those rare American films that seems to have a more reserved, almost British feel to it. The jokes aren’t in your face like in most US blockbusters : this is a film you could take your mum and dad to see. There’s very little in the way of anything naughty like sex or swearing and the more lewd references are simply that : references. You’re left to draw your own conclusions.
As time passes, Ben finds himself helping out all over the office despite nominally being assigned to the boss, Jules. Before long, she too is beginning to realise his importance despite having reservations early on. As the story unfolds and Ben becomes something of an uncle to everyone at the company, Jules’ personal life also begins to require his attention : juggling a young family and a burgeoning business is never easy for anyone. 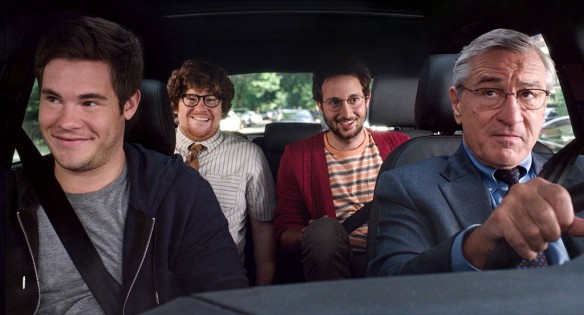 The movie is both feminist and traditionalist and while there are plenty of pointers as to how the world has changed in the last twenty years, there’s also lots of conservative reminders telling us it’s not quite as different as we like to think.

There’s some cracking one-liners and moments of real poignancy, like when Jules likens Ben to Harrison Ford and Jack Nicholson in front of three of her most promising young male employees.
Most promising, slovenly, hairy, badly-dressed, boy-child, male employees.
At least they’re loyal, right ?

I’ve heard The Intern has been panned and widely criticised for its portrayal of both men and women in the workplace. It’s director – Nancy Myers – had defended it staunchly and is used to such write-ups by now, by her own admission.
Don’t believe everything you read or hear about it : this is a very good film and De Niro, Hathaway and Russo all give excellent performances. As I alluded to above, Ben is underplayed with De Niro just letting the gags bounce off him. Hathaway gets the balance between business smarts and domestic woes just right, while Russo steals every scene she’s in as the sassy, sexy, older woman who knows precisely what she wants from life.
And from Ben.

I really enjoyed The Intern and would loved to have watched it with my own parents.
Why don’t you call yours and take them to see it ? You won’t regret it …