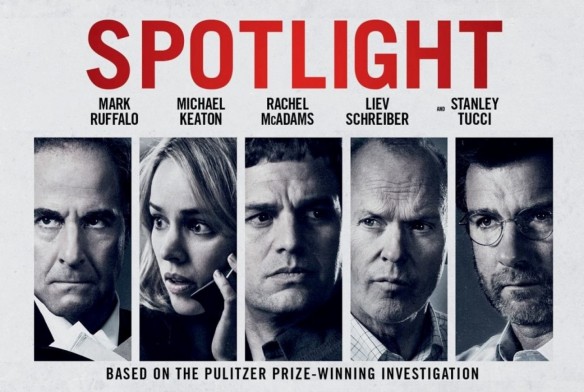 SPOTLIGHT
Gripping journalism drama telling the true story of how a swathe of paedophile catholic priests were discovered and reported by the Boston Globe in 2001. Directed by Tom McCarthy and featuring an all-star cast including Liev Schreiber, Mark Ruffalo, Michael Keaton, Rachel McAdams, Billy Crudup, Stanley Tucci and John Slattery.

There’s not many subjects that remain taboo in Hollywood anymore, but paedophilia is still one of them.
Religion is also a fairly rare topic, unless it’s in the form of a war film with our good christian soldiers duffing up the evil maniacs from the east – any part thereof, it doesn’t really matter: Europe, Middle, Far or Berlin.
I came out of the cinema wondering about how Spotlight even got made. Then I got to thinking about the Oscars – for it is very, very worthy, let me tell you – and that’s when I thought “They couldn’t, could they ?”
It’s one thing to honour a movie about the holocaust or Jesus, but this is a whole new ball game. But really this isn’t religion at all … Spotlight is about society itself.

The story really gets going when the Boston Globe appoints a new editor, an out-of-towner who also happens to be Jewish. This in the biggest Irish community outside of Dublin ..
As he holds his initial meetings with department heads at the paper, one report catches his eye and he tells the elite investigative team, Spotlight, to drop whatever they’re doing and focus instead on the case of the local priest who’s been moved on to a new parish following some vague allegations.
Most of the hacks are amazed he wants his best reporters to waste time going over old history, but this very reaction itself only confirms what some in the room suspect may be the root cause of the problem in the city, namely turning a blind eye.
The plot develops in such a way that you’re never quite sure who’s good, who’s bad, who’s covering something up and who really can’t be bothered with it all.
Luckily, two local lawyers are a bit more easy to read : one striving for justice, the other hiding behind a veil of convenient confidentiality.

Ruffalo’s angry young man is the livewire bloodhound, relentless in his pursuit of the truth.
McAdams’ charming but persistent door-stopper is similarly dogged, but altogether more subtle.
Keaton’s more mature, more patient section chief figure tries to hold them all together, while Slattery’s sub-editor really doesn’t think there’s much point in flogging a dead horse of a story given the previously hushed-up attempts that are already under the carpet.

Bit by bit, piece by piece, the clues unravel, patterns begin to emerge, and pure painstaking research in the library start to lay the foundations not just of the story they’ll run but also the case they’ll make against the system, the local DA and the church itself.
At its centre is a pack of “sealed” papers, detailing accounts and allegations made against various priests in the city. There’s also an ex-priest, who’s been working for years to bring to light what’s really been going on. Meanwhile, one of the team makes a staggering discovery in one scene that will leave you open-mouthed … 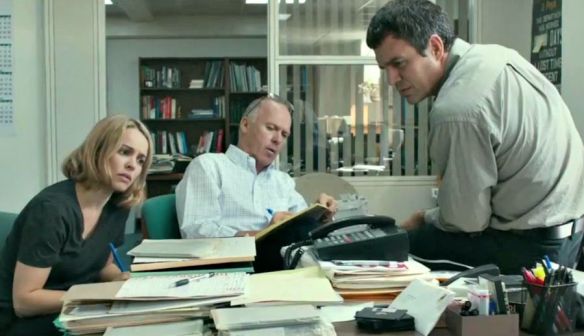 The truth is out there, but it’s how they piece it together that counts.

.. and that is about all I’m willing to say about the plot.
The pacing is brilliant, the tension increasing steadily throughout as more and more layers are peeled away. The acting is superb – every single player is on form and it is a stellar cast of serious leading and character actors – and the dialogue is flawless.

Spotlight is one of those epic movies that leave you both thoroughly depressed yet also curiously uplifted.
At the end I felt emotionally drained but also strangely energised and spent a good hour discussing it with my viewing partner before heading home to google audience responses and check out a few reviews.
It is a bit of a dark horse for the Academy Awards but having watched a lot of movies over the last twelve months, I would say it’s in the top three. Personally I doubt it’ll win any of the big ones precisely because of the subject matter, but films like this need to be made.
… and they need to be watched.
Don’t miss it.
Tell your friends.