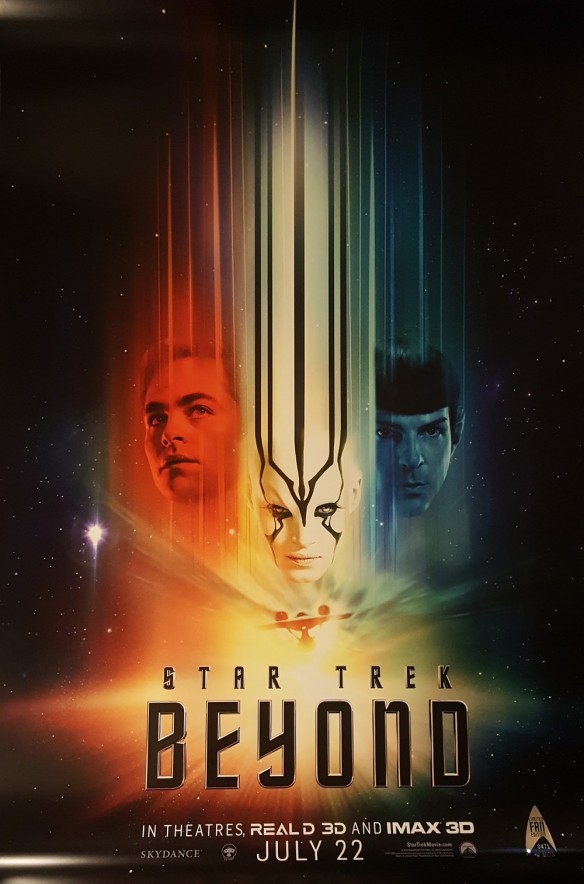 The third adventure in the rebooted franchise of the original series sees the crew having to fend for themselves as they’re caught in an ambush beyond contact with the rest of the Federation. Starring Chris Pine, Zachary Quinto, Karl Urban, Idris Elba and co-written by Simon Pegg, aka Scotty.

I’ve waxed lyrical before about Simon Pegg and how he must wake up every morning and wonder when the dream is going to end .. and then he realises he’s living it.
This movie, beyond all other Star Trek movies, boldly goes back to the roots, the very essence, of the original series and feels more like an extended episode from it than anything Hollywood could ever conjure up for the silver screen.
And I mean that as a wholehearted compliment.

Star Trek Beyond sees a further development – a nurturing even – of the original crew into the group we loved the first time round. At times, it’s easy to imagine you’re watching Shatner, Nimoy and co, so similar is the feel of the picture, so close are the characterisations. In part, this is down to the faithful fan-fiction-turned-pro sceenplay from Pegg and his co-writer, Doug Jung (who also penned two episodes of the Banshee TV series). But it’s also down to the performances of the lead actors, only one of whom can really be considered a bona fide movie star. Chris Pine is unquestionably excellent as Kirk, but Quinto as Spock and Urban as McCoy are almost uncanny in recreating both the physical and verbal aspects of the original sci-fi odd couple. The chemistry between the Vulcan and the physicist was always archly written and carried out with real gusto on-screen by Leonard Nimoy and DeForest Kelley and that tradition is truly honoured here in the latest incarnation of the pair’s curious relationship. 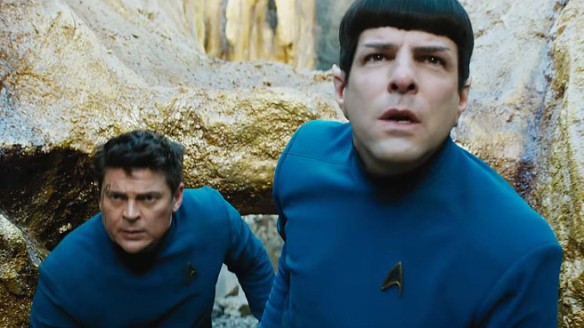 The razor-sharp script forms a great foundation for the movie, but the plot, the rest of the ensemble cast and the supporting allies and villains elevate this into a classic adventure. Hopefully, the days of every other Star Trek film being a turkey are behind us, though this one has not been without its set-backs. The furore over the outing of Mr Sulu, rumours that Urban wasn’t happy to reprieve his role as Bones and above all, the sad and tragic passing of Anton Yelchin (Chekhov) could’ve derailed what has turned out to be an excellent movie.

The story is a classic tale of revenge as The Enterprise cuts short a routine R&R break at the giant space-station Yorktown in order to investigate strange goings-on at a nearby nebula following the arrival of an escape pod at the starbase. It’s sole passenger is Kalara, a survivor of a wrecked ship stranded on Altamid, one of the planets within the nebula, which is notoriously difficult to navigate.
You’ll never guess which vessel in the entire fleet has the best satnav on board ..
And so it is Kirk decides to curtail his holiday, explore strange new worlds and seek out the truth, all while saving a damsel in distress.
So far, so classic, right ?
Well, it gets even more Original Series when the crew discover an old federation ship on  Altamid, thus ending the mystery that shrouded its disappearance for decades. While Scotty gets cracking on a restoration project, it’s left to Kirk, Bones and Spock to .. well, I could tell you but that would spoil the surprise, wouldn’t it ?
The plot is well-crafted, if slightly unoriginal, but there is a delicious twist toward the end that should keep you guessing, though I was so engrossed in the story by that point I’d totally forgotten who was playing the villain.

The cinematography is superb throughout and some of the location shooting in Canada takes the breath away, while there isn’t too much CGI for a sci-fi blockbuster. While it’s necessary for some of the grander set-pieces such as the attack on the space-station, for the most part Beyond is more about the characters than costumes and effects. As with the BBC’s superb Blake’s 7, this was more down to budgetary constraints for the original NBC series than any altruistic artistic reasons, though it pays off in the end with a much more rewarding experience for the viewers.
Kirk gets to play the tough guy hero as Pine channels his inner Steve McQueen, while Uhuru, Chekhov and Sulu enjoy some much-deserved development, putting some flesh on the bones of their hitherto barely-seen supporting characters, with the communications officer in particular holding her own under pressure. Spock unintentionally winds up McCoy, who reacts, snaps back and accuses the Vulcan of being cold/inhuman/unemotional/all of the above, before the latter plays a flat bat and returns with a completely logical but even more infuriating reply, as the pair descend into a vicious circle ad nauseum. Great fun for the fans, but worryingly dangerous for the good doctor’s blood pressure.
As for Scotty himself, he’s rather restrained in Beyond, as Pegg gives most of the best one liners to others. Having said that, he’s clearly happy tinkering with his new toy and he still enjoys a good chunk of screen-time.
There’s some highly original chemistry at work in the rescue attempt as old mechanics merge with new tech, and there’s some utterly ludicrous physical gymnastics and gravity-defying acrobatics during the finale, but it’s all done with a certain style and tongue-in-cheek elan that makes it retro-realistic rather than ridiculous. Let’s just say that in the sixties, the stuntmen would have earned their corn that week .. 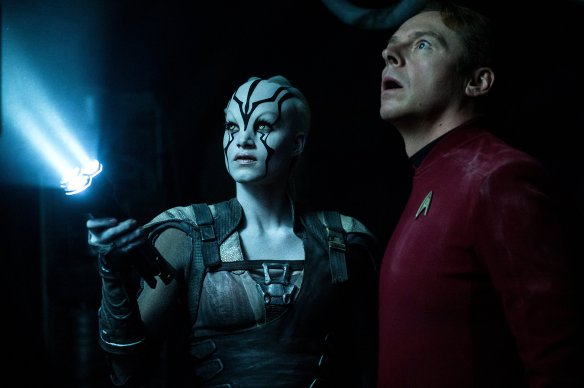 The denouement is nicely played-out as the morality of the tale unfolds before us.
Kirk, Spock and the rest of the gang have plenty to think about as they’re forced to take some much-needed extended shore leave when things settle down, though Beyond ends firmly looking to the future and the next instalment.
I get the feeling that the franchise, like The Enterprise herself, will be safe for a while yet so long as it remains under Scotty’s care …