After a very long wait, everyone’s favourite kooky heroine Bridget finally returns to our screens with a new look, a successful career and is seemingly in charge of her life at last.
What could possibly go wrong ?
Directed by Sharon Maguire who also directed the original movie in the series, and starring Renee Zellweger, Colin Firth and Patrick Dempsy.

Twelve years on and Bridget’s looking good.
No more big pants, a proper career and she’s no longer entangled in a messy menage with Mark Darcy and Daniel Cleaver. Could she possibly have grown up at long last ?
Well, maybe .. but she’s still tempted to regain her youth by going to festivals in white jeans and claiming to understand Instagram to impress her younger, hipster colleagues.
But you’ve seen all that in the trailer …
You’ve also seen the rather awkward return of Mr Darcy and the new love interest in the shape of Jack, a dashing American. 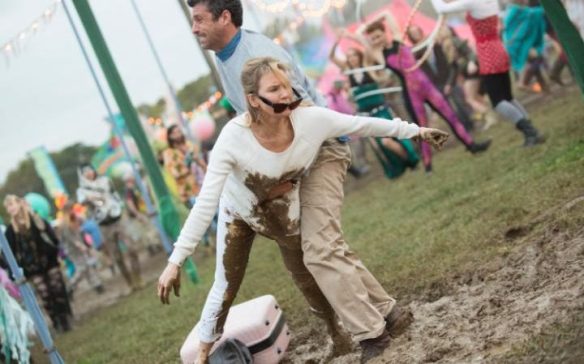 Looking back, the story of bringing this picture to our screens would probably make a decent movie in itself what with the many rewrites, the speculation about Zellweger’s state of mind, the refusal of Hugh Grant to appear in it, the constantly rotating team of writers and – finally – the addition of latecomer Patrick Dempsy to the cast (actually a year ago, but it feels last minute).
What finally brought it all together was the decision to reappoint Maguire as the director and Emma Thompson as co-writer on the screenplay. As ever, she’s an imperious presence on screen, playing a cynical, worldly-wise doctor who’s been there, done that and delivered the baby, and of course she gives herself many of the best lines and steals most of the scenes she’s in.
The script itself has a real zip and zing to it and there’s plenty of laugh out loud moments either born out of pure slapstick or cringing embarrassment. This is a movie that lampoons men and women equally and lifts it from the usual “war of the sexes” rom-com territory.
It’s not just Mars versus Venus : it’s far more universal in its open ridicule of relationships in general, of society as a whole and indeed of the entire human race.

There’s lots of wry social observation throughout and you’ll find yourself thinking about times in your own life when you’ve been at a wedding or christening and bumped into someone you wished you hadn’t.
The familiar keep calmness of it all is terribly British and part of the fun and carries on a fine tradition stretching back through Love, Actually and Four Weddings.
… which brings us back to that man Grant again.
There is a Hugh-sized hole in the film. His non-appearance is dealt with in the very first scene and it takes a while to shake the old scoundrel out of the system and for the movie to breathe in its own right, especially after the uptight Mr Darcy reappears, replete with his beautiful wife. Rest assured, moments later you’re squirming in your seat again as Bridget manages to put another foot in her mouth and before you know it you’ve forgotten all about dastardly Daniel altogether. 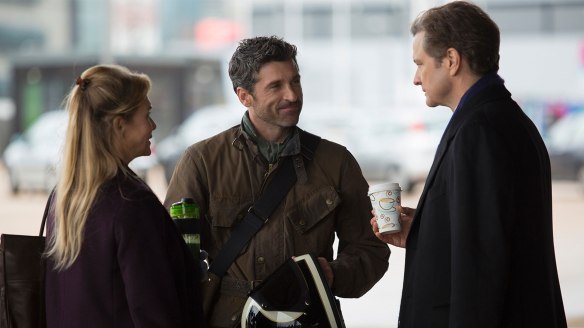 Some of the best gags are career-based, centred around the TV show Ms Jones works on. There’s a rich seam of comedy gold to be mined behind the scenes of the news programme she writes for, with a welcome cameo from Drop The Dead Donkey‘s Neil Pearson, who also attempts to be down with the kids when he grows a huge beard and starts drinking flat white. With the studio going through a shake-up, their jobs are on the line so when our heroine finds out she’s pregnant and she’s not sure who the father is, the stakes are suddenly that bit higher.

The second half of the movie homes in on the whole issue of whether it’s the stiffly repressed Mark or the relentlessly positive Jack that will prove to be the father of Jones Jr.
The dad-o-meter swings back and forth as the writers pitch first one then the other as the good guy and you find yourself wavering between the two as you decide who to root for.
The obvious answer is Bridget, especially given her track record with men, but that’s beside the point : we need closure ! 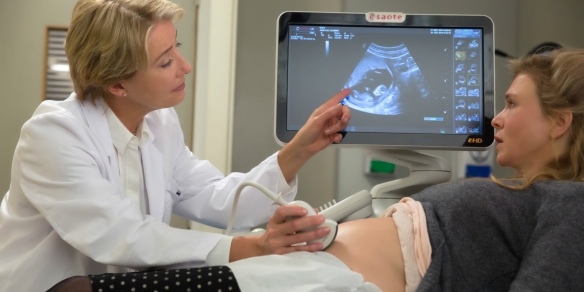 .. and it takes a while coming, believe me.
The twisty, turny, somewhat torturous route to fatherhood is a long and winding road, but worth the trip .. not that you’ll get any pointers from me. You’ll have to find out for yourselves by watching the movie.

Bridget Jones’s Baby is a real return to form for the series after the somewhat disappointing Edge Of Reason. Zellweger is back to her awkward but lovable best. Firth is stiltedly restrained and utterly flawless. Dempsy plays his part well and nails the upbeat American cliché beautifully. The rest of the cast are as brilliant as ever.
All in all it’s a cracking mid-life crisis everyone can enjoy.