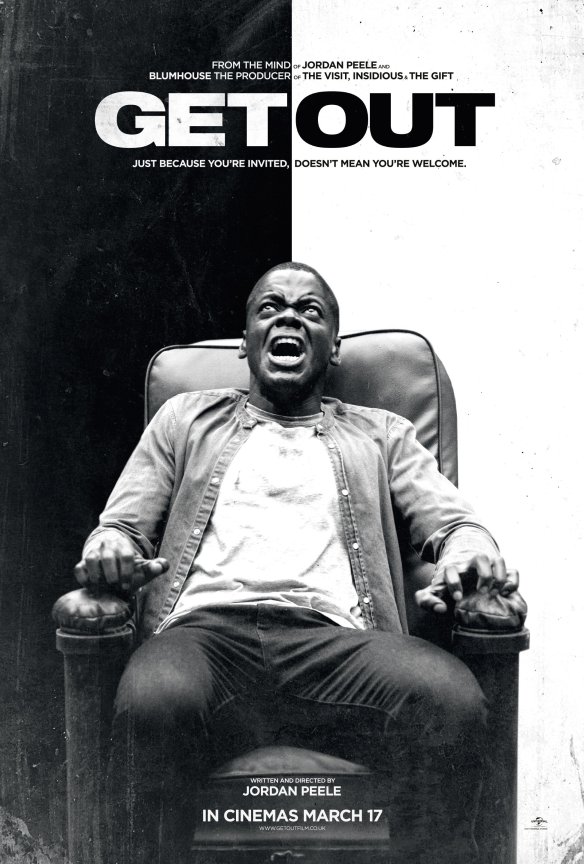 Deceptively upbeat psychological horror-thriller about a mixed race couple’s “meet the parents” weekend in the country where all is not what it seems.
Starring Daniel Kaluuya and Allison Williams and directed by debutant Jordan Peele.

Get Out is one of those movies that are difficult to talk about without giving too much away yet the urge to talk about it to everyone you know burns so hot that you long to bump into someone who’s already seen it so you can speak freely and dissect it without the fear of spoilers.
Not an easy film to review then ?
Well, actually no : it is easy because it’s so darn good.

The plot focuses on a young couple, Chris and Rose – Kaluuya and Williams respectively – who are blissfully happy together and have reached the point in their relationship where they feel that it’s time to meet the parents. For any newish lovers, this step can be daunting and fraught with anxiety, but because Chris is black he knows it might well be more awkward than usual to meet Rose’s white family. She assures him they’re dyed-in-the-wool liberals and not racist in any way and jokes that her father would’ve voted for Obama for a third term if it had been possible. He takes it all very calmly, trying to gently explain that it’s not as simple as that. Chris has a world-weary view when it comes to his colour and this is quickly put to the test early on in the story when a traffic cop stops to help them out of a sticky situation as they’re travelling upstate to Rose’s family home.
Daniel Kaluuya nails the role of Chris in Get Out and his straight-down-the-middle playing of the character is perfect as the entire tale revolves firmly around him more than anyone else. His face is the canvas upon which the picture unfolds, and with each scene it seems to stretch ever further as the initially genuine smile goes through a whole journey of its own from mild amusement to curiosity and way, way beyond ..
I knew I’d seen him before and after the movie I looked him up and found that he’d played the part of a relentless traffic warden – a recurring character – in Harry Enfield and Paul Whitehouse’s last sketch-show. That’s some leap from BBC2 to Hollywood but on this evidence he’ll go far because he carries the movie beautifully with his restrained and nuanced performance here. 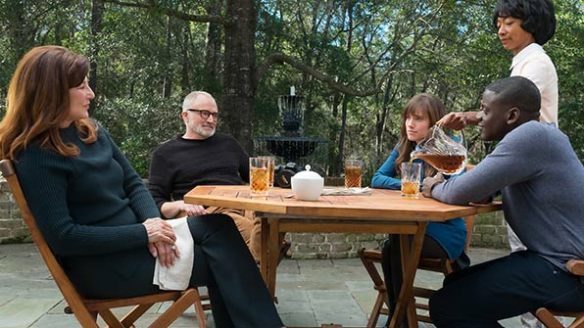 On arriving at the sprawling estate of the well-to-do Armitages, Rose introduces Chris to her doctor father and psychiatrist mother and predictably enough they fall over themselves in not only trying to make him feel welcome but also to reassure him that they hadn’t given his colour a second thought ..

The film reminded me a lot of The Shining for two reasons : firstly, there’s a very retro 70s feel to it in that it’s relatively slow-paced and the story itself feels fairly out-of-kilter with the modern world; but also because the initially jovial, almost comedic flavour jolts and jars very suddenly into something completely different about halfway through the story when you start to get an inkling of what’s really going on.
I can’t say anything more about the plot for fear of spoilers and this is one film you really should keep schtumm about because it’s so good and so rewarding if you go in blind.

There are some genuine laugh-out-loud moments and although Get Out is billed as a horror movie, it’s too cerebral and too layered just to stick one label on it. It’s a proper old-fashioned mystery with a timeless quality to it and one that deserves a wider audience than it’s marketing budget will provide. Like many classics it may well go on and make its name through word of mouth and via streaming and on-demand platforms in the next few months and years.
It doesn’t matter how you see it, just make sure that you do .. and tell your friends : it’s that good !