OSCARS SPECIAL
With the awards season upon us, it’s time to a look at four of the most nominated films for the Oscars having already banged the drum for the superb Get Out a few months ago.

THE POST
Oscar nominations : Best picture, Lead Actress (Meryl Streep)
Steven Spielberg, Tom Hanks and Meryl Streep all working on the same picture ?
The Post screams quality from the get-go.
It’s a very earnest and very American story centred on the freedom of the press, which came under serious threat from the government in the late 60s as the horrors behind both the Vietnam and Korean wars began to unfold in increasingly cynical newsrooms across the country. Richard Nixon and his predecessors had all massaged the truth to some degree and the pressure was on The New York Times to be prudent in order not “to put young soldiers lives at risk” despite the evidence being on the table in the form of some stolen secret dossiers. The Washington Post, under editor Hanks and owner Streep, also have a set of the documents and must decide whether to run the story or not, risking both the paper itself and the jobs of all who work there.
Set pre-Watergate, The Post tells the tale leading up to the infamous, and to date, only resignation of an American president – still, here’s hoping, eh ?

Like Spotlight, The Big Short and Inside Job before it, The Post can be a little wearing for British viewers and hindsight also doesn’t help it, knowing as we do now that pretty much all regimes – and indeed news outlets – work to their own agenda, yet it remains a compelling movie and not just because the two leads are so strong. The feminist angle is appropriately handled for the era, with Kay Graham (Streep) not afraid to ask for advice from her senior male staff yet also being strong enough to take her own path, even with Ben Bradlee (Hanks) initially undermining her every move like some sort of journo-warrior hell bent on defending truth.
Neither character is as two-dimensional as that and the most interesting development in the movie is the way both change their minds along the way, coming to respect the other more than they thought they ever would. I can’t really say any more for fear of giving away spoilers, so I’ll leave it there for the plot though the film has rightly been lauded across the board, and especially in the US.

DARKEST HOUR
Oscar nominations : Best picture, Lead Actor (Gary Oldman)
What was most fun about seeing Darkest Hour wasn’t so much the film itself, though I will say from the start it is an astonishing performance from Gary Oldman, but the fact I saw it immediately after watching The Post. The delicious contrast between American and British views on leaders deceiving their public was something to think about throughout, although in truth one lied to make money and save his own arse and the other to strengthen the resolve of his people. I’ll leave you to guess which ..
The story focuses on Churchill’s rise to power at the beginning of the war as Prime Minister Clement Attlee comes under increasing pressure to broker peace talks with Hitler. His own party are losing faith in their PM and as the various characters behind the man at the front are jostling for position, Churchill finds himself suddenly in the running despite suffering a reputation as a bit of a failure and very much a loose cannon.

Sensing the mood of the people, he defies the call to meet the Nazis in Italy, rejecting Mussolini’s invitation and instead (literally) sticks two fingers up at both the Italians and the Germans while simultaneously winning the hearts and minds of both his colleagues at Westminster and the country itself.
There is some license taken with the truth here by director Christopher Nolan, but it serves the story well, in particular the scene where Churchill takes to the Underground after realising he’s never even used public transport before. Other elements of the tale are, by all accounts, absolutely true – the V for Victory element being one, though I won’t spoil the fun here – and the film isn’t afraid to show the darker side of our “Greatest Ever Briton” either.
He’s a boozy, cat-napping curmudgeon at times, while effortlessly charming and wordly-wise at others. His wife – played with just the right balance between devotion and exasperation by the wonderful Kristin Scott Thomas – is driven to both extremes often in the same scene, yet has faith at a time when so many had lost theirs. Oldman is a master craftsman and within moments you forget he once played Sid Vicious and Dracula and instead are utterly immersed in his world, his time, his story. This a performance of subtlety and shade, of dark and light, of hope and despair and ultimately of pure class that makes Darkest Hour the perfect half of a bulldog double-bill with Dunkirk. 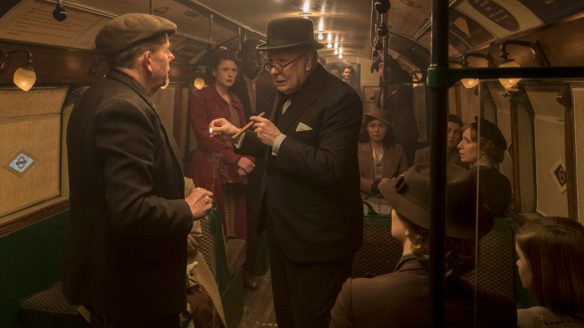 Gary Oldman will be confident he will win the Best Actor Oscar, though I have a sneaking suspicion Get Out’s Daniel Kaluuya could just sneak it.

THREE BILLBOARDS OUTSIDE EBBING, MISSOURI
Oscar nominations : Best picture, Lead Actress (Frances McDormand), Supporting Actor (Woody Harrelson and Sam Rockwell)
I have never seen a film like Three Billboards before in my life.
It’s ostensibly a drama, but there are so many gear shifts along the way that you can never just call it that. There are some absolutely laugh out loud moments, including some when you know you really shouldn’t given the subject matter, but it’s that blackness of soul at the heart of this astonishing picture that makes you feel like you’re in on the joke just by being there and watching it. There really is an element of voyeurism in the movie that makes it stand out. It’s not anything seedy, underhand or criminal in the traditional sense, it’s the fact that you’re looking these characters squarely in the eye, seeing them warts and all for what they really are .. and that they can change, for change they do, right in front of you. 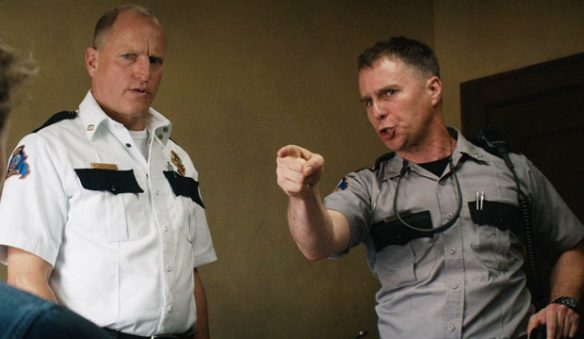 This is about as twisty as you can get in Hollywood, but not in a cheesy whodunnit or teen-horror kind of a way : I’m talking about watching a person doubt their very purpose, their existence, their reason for living in a way that has never been done before.
The story centres on Mildred Hayes (Frances McDormand) a middle-aged woman fighting for justice for her daughter, raped and murdered months before. With no sign of an arrest and a distinct lack of interest from the local police department, Hayes takes things into her own hands by renting the eponymous billboards to ask the authorities why. Often sporting a bandana while wearing a boiler suit, this is not a woman to be messed with. She confronts everyone from the local chief of police (Woody Harrelson), his deadbeat deputy (Sam Rockwell) and her own ex-husband – now shacked up with a 19-year old girl who works at the local zoo – and refuses to back down despite coming very close to being arrested herself on several occasions. Aided and abetted by a sympathetic handful of the local populace, Hayes is both admired and feared, but also lusted after by the “town dwarf”, played dead straight by Game Of Thrones’ Peter Dinklage, handler of some of the juciest lines in what is a very rich script.
This is American corruption writ small. Forget Watergate, this is a scenario where everyday folk can actually take some action, a situation familiar across the globe : we know we can’t affect big business or government authority but we can sure raise hell in our own back yards if we choose to.

McDormand WILL win the Oscar. This is a superlative piece of film-making and I could also see either of Harrelson or Rockwell taking the Best Support gong too, while Best Picture could also be in the bag. Definitely one, possibly four of the big ones for this amazing movie.

THE SHAPE OF WATER
Oscar nominations : Best picture, Lead Actress (Sally Hawkins), Supporting Actor (Richard Jenkins), Supporting Actress (Octavia Spencer), Best Director (Guillermo del Toro)
The cold war, the sixties, a mysterious aquatic monster, an underground research facility .. none of these ingredients usually feature in a romantic fantasy unless the picture in question is directed by the singularly bonkers Guillermo del Toro. The Mexican maestro has long been the master craftsman of flights of fancy such as Pan’s Labyrinth and Crimson Peak but The Shape Of Water may well prove to be his masterpiece.
Set in a rather dystopian version of the relatively recent past, the story centres on Elisa (Hawkins) a mute orphan working as a cleaner in an ocean research centre while living above an art-house cinema. Her neighbour is an ageing gay commercial artist, Giles, who’s prone to donning an ill-advised toupé whenever he leaves the house, while her only other friend is her colleague, Zelda, played with real fury by the always excellent Octavia Spencer. Elisa’s strange little world owes a lot to both Terry Gilliam’s Brazil and any number of B-movies and musicals from the past, some of which make up the very fabric of this particular tale, once lush but now sadly tattered in places.
Visually, the movie is beautiful from the teasing opening frames set underwater that hint at what lies ahead, right through to the end. The script is spare – Elisa is unable to speak, after all – which means the dialogue actually packs more of a punch when it is spoken rather than – utterly convincingly – signed by Hawkins in her role as the dreamy protagonist.

Her performance really is spectacular and definitely another career best. I’m not sure what must go through the mind of an actor when being offered a role with minimal lines but the fact that Elisa says so much throughout her entire adventure without actually speaking a word shows just how good an actress Sally Hawkins is.
The creature is wonderfully realised and although nothing is shown in the trailer, reveals himself fully from quite early on in the story, though not quite as early as Elise herself. There’s a surprising amount of sexuality in this picture right from the very beginning, and although everything is tastefully shot it is mildly alarming given that there was very little suggestion of it from the previews that were available.
As with any period-fantasy-thriller-romance, there has to be a villain : step forward Michael Shannon of Boardwalk Empire and Batman v Superman fame. As menacing as ever, his is the role of tormentor-in-chief of our aquatic victim, a situation Elisa is out to change as soon as she realises what’s really going on in the “laboratory” where they’re holding the creature.
I really cannot say anymore for fear of spoilers, but I can tell you that this is one of the best movies I’ve seen in a very long time. 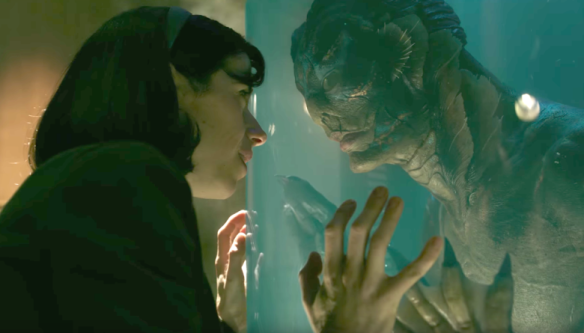 In fact, it’s so good I think The Shape Of Water will win the Best Picture award.
Sally Hawkins is also in with a great chance of the Best Actress award, not just because she’s playing a very sympathetic character in Elise but because she does an outstanding job. Del Toro could also pick up the gong, as much for his enduring body of work to date as for this, his finest outing yet.