Your walk is as unique as your fingerprint.

Consider that little pearl for a moment.
Your body shape as you stroll down the street is as individual as a set of inky prints you might be asked to leave at the police station next time you’re naughty.

This fact blew my mind when I heard it a while back. It made me think about when I switch the TV on and find there’s a football match playing, and how a lot of the time I could instantly tell who was on the ball because of the gait of the player in possession. There was the Beardsley Shuffle,  the Adams Lope, the Pearce Powerhouse, the Le Tissier Shamble and of course the Waddle Waddle … all instantly recognisable and now I knew why.
It also explains why software houses like to put hundreds of tiny stickers on an athlete’s body so they can bodymap their movement accurately for FIFA-R-Evil2014, or whatever it’s called these days. 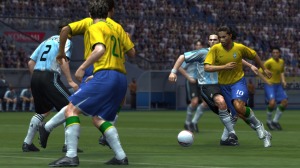 The thing is, some people are better at walking than others. Next time you’re out and about, take a look and see for yourself. When you’ve got ten minutes to spare, get a cup of coffee, find a bench on a busy thoroughfare, rest your weary legs and give your eyes a treat: stop and actively look at the way people move. There’s all kinds of crazy things going on and we’re normally just too busy to notice. Of course, there’s today’s double classics “Phone to ear, not really looking where I’m going” and “Looking slightly mental, oh no wait, he’s got a bluetooth headset on, he’s not actually talking to himself” (by the way, isn’t it funny how the only people who wear those things are older gentlemen who really should know better … and they always choose the biggest one that looks most like something found at the back of the Star Trek props cupboard, with the brightest flashing blue light this side of Andromeda).
Once you get past those two, things start to get interesting:
– The goth, no arm movement whatsoever, long stride lollop
– The emo, staring at the floor, intensely avoiding eye contact trot
– The hardman strut, chest out, staring fiercely at everyone they see, probably saying to themselves “I could ‘ave ‘im … and ‘im … she’d get it … and I’d ‘ave ‘im”, etc.
– The Manc-wannabe, like someone auditioning for a Kevin and Perry stageshow
– The inner-heel Ugg boot reshape traipse (why do all teenaged girls seem to walk on the inside of the backs of their feet, or is it just the boots are really badly made ?)

But the best of all that I’ve seen recently was surely the young man I saw brazenly parading along just the other day … it was like watching James Brown in his pomp!
He had four orange carrier bags, two in each hand, so presumably he’d done a bit of medium, mid-week shopping at Sainsbury’s and plainly wanted to get home as quickly as possible, because he was actually doing what I can only describe as The Funky Chicken.
The bags were acting as counter balances to his somewhat slender frame and the resulting effect was that his arms were looping out and up with every step, but as he was so heavily laden, they remained at his sides at all times.
They say a picture paints a thousand words, so have a look at this:

It actually reminded me of those golden moments when you see someone trip slightly on a wayward paving stone, but rather than stagger about like any normal human being, the victim tries to make out they were about to start running for a bus – it really is all you can do to stop yourself from laughing out loud … the trouble was, this guy was walking towards me and I had to endure a good fifty yards of trying to keep a straight face. This was a fairly quiet path on Southampton Common, not a busy high street … I managed to hold it off till he passed, but then I must have been grinning like a loon, probably shaking my head as well, because the very next person I saw gave me a funny look as if to say “What’s your problem, mate?”