Up until a couple of generations ago, most men wore hats.
They wore them to work. They wore them to play. They wore them even when on holiday.
I’m not trying to write a song here, even though the last three sentences would have made a cracking opening verse, but simply stating a fact: hats were an everyday part of a man’s wardrobe.
What happened ?
Why don’t more men wear more hats ?
It’s probably tied up in the psychedelic revolution that was the sixties and interwoven with the reason fewer men wear suits these days as well. Now, they too are generally only worn by “professional” people or on special occasions.
So, as a gentle nudge to prompt them back into fashion, here’s a helpful guide to the marvels of millinery …

The Baseball Cap
Once a classic staple of the rugged man’s outdoorsy look, the baseball cap would typically be worn with an oversized checked shirt, jeans and a pair of sturdy workboots, preferably by someone driving a pick-up. An honest to goodness working class hat, it stood for blue collar origins and a passion for sports.
Nowadays, the caps tend to be oversized while the clothes are skinny fit and the art of bending the peak to form a natural frame for the face has been lost in favour of a machine-engineered flat peak, worn at all kinds of odd angles but never simply to the front.
In future years, this look will be ridiculed in much the same way we laugh at photos of our dads in platform shoes and flying collars.
YES – Anyone, anytime so long as the cap has a curved peak; children and rappers for the new style
NO – Anyone over 25 years of age for the new style 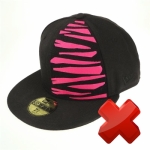 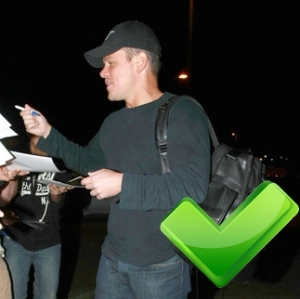 The Beanie
Almost as ubiquitous as the baseball cap, the beanie in its myriad forms has become a firm favourite in the northern hemisphere. There are two reasons for this: the first is the weather, while the second is this hats inherent ability to cover up all manner of bad hair days. Running late ? Grab that beanie and save fifteen minutes grooming time. Bloody cold out ? Pull it down over your ears and you won’t feel the chill.
From bank robbers and commandos in balaclavas, through Serpico’s seventies skull cap, your childhood bobble-hat woven by grandma, right up to the oversized slouch beanies that even appear on today’s catwalks, this knitted classic is here to stay.
YES – children; football fans; fashionistas
NO – NA 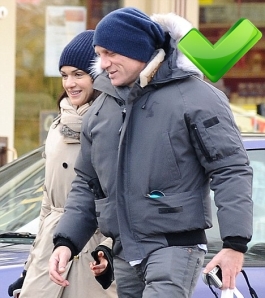 Large Trilby/Fedora
Rarely seen these days, the fedora was long the mainstay of the well-dressed man from the 1920s right into the post-war years, until the explosion of fashion in the 60s ripped up the rulebook forever. Beloved by gangsters, jazz musicians and flamboyant football managers, this stylish head-turner should be worn at a jaunty angle and always with an equally ostentatious double-breasted suit.
YES – Al Capone, Humphrey Bogart, Malcolm Allison; WWII spivs
NO – vicars; bankers; accountants 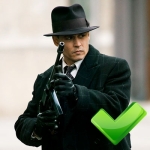 Small Trilby/Pork Pie
A more reserved and formal piece of head-wear for the more reserved and formal man about town. For the chap who wished to blend in, the small trilby was ideal as it was both professional enough in appearance and yet discrete enough so as not to draw any unnecessary attention to or expectation of the wearer … well, until the mid-to-late 60s anyway, when the newly titled pork pie hat suddenly took off along with the rise of black culture in general and ska music in particular.
YES – Linton Kwesi Johnson, Alexei Sayle, Walter White, Gene Hackman; drivers of Austin 1100s
NO – Fat people of any kind; skinny indie kids wearing skinny jeans and skinny-fit t-shirts, drinking skinny lattés and smoking skinny rollies outside shopping centres 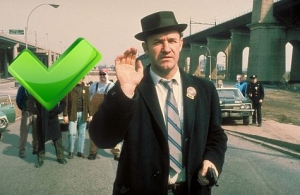 Bowler
Almost a non-hat, really. It’s part of the uniform for city gents and that’s about it, other than its adoption by one Charles Chaplin and occasionally Laurel and Hardy. So it’s basically a clown’s hat …
YES – Financial gurus, silent movie stars and circus entertainers
NO – everyone else

Top Hat
Similar to the bowler in that it’s generally only worn by one profession, in this case undertakers.
And Slash, lead guitarist of Guns n Roses.
YES – Undertakers and Slash, Odd Job in Goldfinger, Willy Wonka, any male relative of either the bride or groom at a wedding
NO – everyone else on any occasion

Stetson
Cowboys. Country singers. Residents of the deep south. Small boys. One bloke in The Village People. That’s it.

Anzac
Usually worn by fat fan-boys of the Indiana Jones movies though briefly also during the Crocodile Dundee years, the Anzac should really only be worn by people in the jungle who actually know what they’re doing there. They should not be worn with a matching waistcoat to go shopping in Poundland.
YES – Anzac troops, Crocodile Dundee
NO – everyone else

German Helmet
An instantly recognisable design classic, this Nazi piece of Hutmacherhandwerk was briefly also worn by bikers in the 60s and 70s until talking about the war finally became a no-no following Basil Fawlty’s rant on BBC2. They seemed to disappear overnight after that. Well done, Basil !
YES – The Wehrmacht between 1936-45
NO – Absolutely nobody else ever.

Newsboy
Finally, we have my own personal favourite and a timeless classic: the newsboy.
This hat is style itself and can lift a decent outfit onto an altogether different plane. Whether coupled with a baggy suit and handmade shoes, or worn with jeans and a simple shirt, the over-sized panelled cap oozes class and confidence and announces “I don’t care what you think. About anything”. It speaks silently of Marlon Brando and James Dean, of Chet Baker and Miles Davis, of Cary Grant and Kid Creole (there’s two people I would never have put together until now).
It’s so versatile it’s essential and so funky it hurts.
YES – people with an inherent sense of style, small boys selling newspapers on street corners
NO – everyone else

2 thoughts on “A gentleman’s guide to … Hats”