… but don’t worry.
It’s not about to make a return to our living rooms any time soon … it’s actually popping up on the street with alarming regularity.

If you’ve ever tried painting over a textured surface you’ll know what a pain in the artex it can be. I once had the delightful task of painting the kitchen “a lovely summery yellow”, as requested by my girlfriend at the time. It was only when I got cracking on the first wall that I realised I hadn’t quite allowed enough time to get the job done on a Sunday. A month of ’em, sure, but one day to finish it ? No chance.
It’s a bit like trying to grow your hair long when it’s naturally wavy: it takes two or three times longer because there’s further to go than with straight hair (and believe it or not, I do know from experience).

The first coat you can whack on with a roller but the effect is a bit like watching a TV chef using a blowtorch on a meringue: only the sticky-up bits change colour, while the rest of it – the thick goo in the middle – tends to stay the same because of the relief between the contours of the surface itself.
So you have to go back.
You have to get a nice big paintbrush,  preferably one that’s old and a bit crap but it won’t matter, liberally dose it up and then muck about like a four-year-old during “art time” at play school.
Just splooge it in here, splodge it on there, stand back, check the light from different angles, then move on to the next bit. Splooge. Splodge. Inspect. Move. And repeat …

The worst thing is wet yellow paint tends to pick up the shine of any nearby light source, so you end up thinking you haven’t covered a section but really you have, it’s just reflecting “white” from the light right back at you. And the more you do this, the faster the paint goes from the pot to the wall and the thicker the coating becomes, meaning the drying time slows down.

Then you have to wait. Two coats ain’t gonna cut it.
You have to do it again, this time like an artist applying the final flourishes to his latest masterpiece.
You stand, legs akimbo, with a small brush modestly loaded with paint and thrust out at the wall when you spot a patch of white. Of course, this is a day or two after you started because you must let it dry first. And it’s still only one wall. If you’ve got a matching ceiling it can turn into a living hell.
If you didn’t have freckles before, you will have now: nice yellow ones.
The colour was exactly the same shade as supermarket own label ice cream … the kind you get in a two litre tub that purports to be “soft scoop”. It is when you get home from the shop and it’s had chance to thaw out a bit, but try and gently spoon out a bowlful a few days later and it’s like chipping coal from a rock face.

So there I was … covered in drops of yellow paint … hallucinating on the fumes, imagining I was inside a giant tub of vanilla that I’d somehow managed to eat, only to leave four walls and a lid blocking my path to freedom. 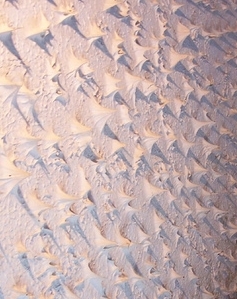 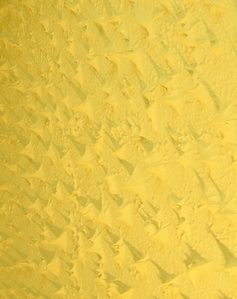 I actually have it in my flat now and I can’t bring myself to do anything about it because I know what a nightmare the stuff is … until I saw an expert plasterer making good my kitchen ceiling the other day. Now I know exactly what to do: hire him again and let him loose on the rest of the place !

I’ll keep the other ceilings though, because they’re mostly done in that “records” style and I’ve got a lot of records myself so it’s in keeping with the rest of the interior. I’ve often thought about painting one room black, but leaving enough white in the middle of the discs to create a “record label”. I think that would look pretty cool, all in different colours. I could even write on the names of all my favourite albums, add a splash of white to the black to make it look like a proper piece of vinyl shining in the light … then I snap out of it and remember that it’s artex we’re talking about. Leave it to the professionals … 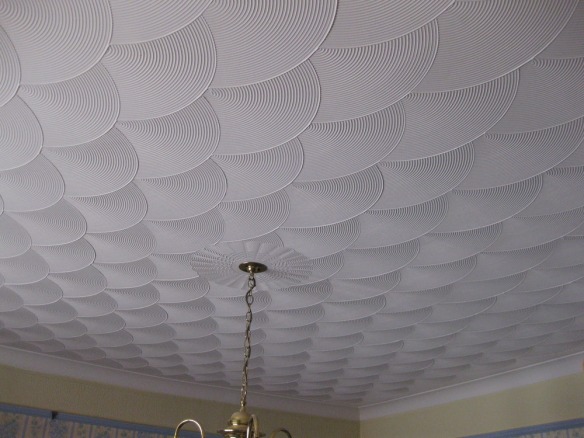 Which brings us to the resurrection, the salvation and the veritable re-imagination of the 70s plaster-based decoration, only this time it’s on the high street. And the avenue. And the lane, the cul-de-sac, the road, the crescent, the drive and the square.
Artex isn’t just difficult to paint … when it’s combined with the right chemicals, it’s actually impossible to mark in any way, making it a natural anti-graffiti measure which is why you’ll soon start noticing it more when you’re out and about. With the rather sudden proliferation of digital, internet and television services popping up all over the land, it’s not just the roads that are being dug up, but the pavements as well. You’ll see more and more of those drab steel engineering stations now you’ve read this. They’re every twenty or thirty metres in urban areas now, and not far short in the suburbs and villages, once broadband is rolled out to them. Those little grey boxes you walk past every day. You know the ones …

And it’s all because of my ice-cream nightmare. 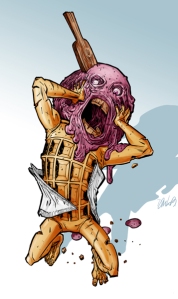 Well, not because of me personally, but because of the difficulty in spraying a tag on them. Even a fly-poster can’t deface them – and that’s important in a place like London, let alone a provincial city like Southampton. 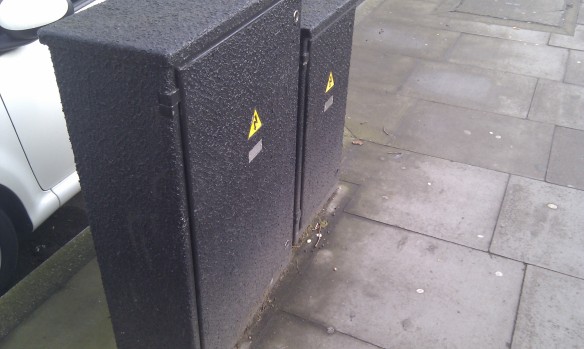 I do feel I’m owed some sort of compensation though. I just feel short-changed.
I could’ve told them how to deal with the problem years ago if they’d only asked.
I don’t want much … just a token, you know ?
A box of chocolates, maybe … or even .. oh, I don’t know .. a nice ice-cream.
And stick a bloody flake in it too.