The other day I went shopping in Lidl.
I really like Lidl.
They’re a fine example of German efficiency and – along with Aldi – they’ve shaken up the UK grocery business and helped reshape the economic landscape with their clever buying and their ultra-competitive pricing policy.
Who can resist a dump bin full of assorted nylon cycling gear ?
How about that fantastic display of angling gear ? I don’t even fish but I love it.
Let’s not forget the construction section – if I was a bricklayer or a carpenter, I’d be sure to buy all my tools and safety-wear at Lidl. I was a massive fan of Auf Wiedersehen, Pet so it would feel criminal not to …

You never know what they’ll get in next in their non-food section and I really like that about them. I can imagine that being a buyer in some office in Baden-Württemberg is actually quite an exciting business. You know that episode in The Apprentice that sees the cocksure contestants go to a giant warehouse in Essex armed with £500 only to have to buy and sell stock and then keep reinvesting their earnings by going back and buying even more tat to sell on the South Bank ? Well, I imagine it’s like that but with the whole world as your warehouse …

It’s not just the jumble sale of the middle aisles that keeps me coming back, though.
I also like their fruit and veg, which is tastier than the big chains’ stock and has more of a market feel to it.
Their beers, wines and spirits are always interesting, as are the cheeses and the confectionery.
Some Lidl stores have now added an in-store bakery too, which takes them to a whole new level for me.
Their ciabattas are really good – crunchy on the outside, but soft on the inside and if you manage to pick up a warm one just get that baby home, open her up and smother her in butter … you’ll be in culinary heaven.
I was browsing that section the other day when a very small, very old lady asked me something. Well, I say “lady” … even now I’m convinced she was Yoda. I couldn’t actually see her face because she was wearing a slightly over-sized headscarf and stooping as she spoke. I would have needed to lie down on the floor and look up to see her face and that’s hardly behaviour befitting a grown man in any kind of store, let alone Lidl in Shirley.

She uttered the immortal words “No croissants do they have ?” to me and stood motionless, looking at her shoes, evidently waiting for me to help her.
“Well, they have pain au choc here” I said, indicating.
“But have you tried the almond ones ? They’re amazing” I suggested, and led her along the section toward the afore-mentioned marzipan comestibles.
“The plain ones are here too, look” I said, realising the display could do with a bit of reorganisation at this point.
“Plain, will I take” she said, simply, before pushing past me with a surprising amount of force for such a small person. 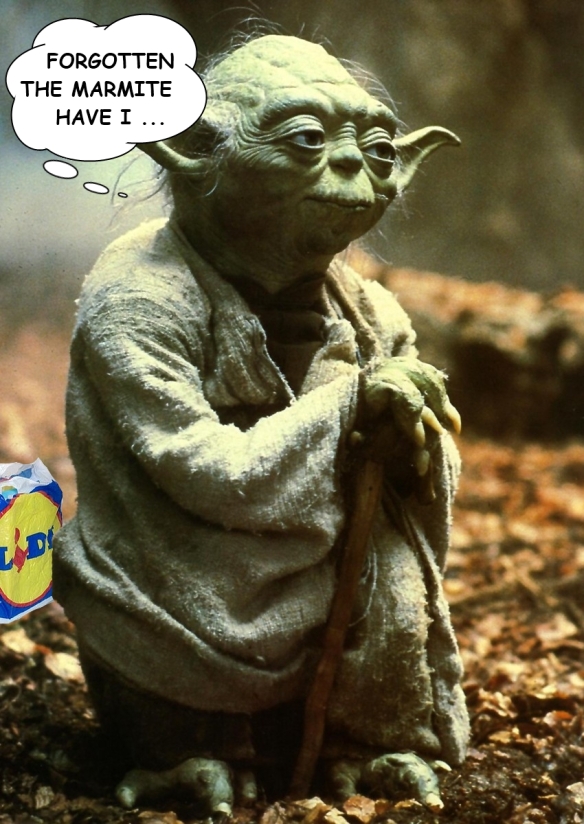 I have never heard anyone speak like that, ever.
She genuinely sounded like she would live in a swamp, subsisting on grubs and watery soup … yet, here was she now, in Lidl, the shopping doing. I stood there scratching my head for a bit, half trying to decide what loaf to buy and half trying to figure out if I’d imagined it all.
She even walked like Yoda and as she moved away it was almost as if she was gliding, millimetres above the tiles …

Well, if it’s good enough for a Jedi I’m going to continue shopping there.
Sainsbury’s especially always felt too much like the Empire to me anyway, having worked for them in my youth.
When I stopped working there, it took me a while but eventually I realised I could shop where I wanted.
No longer did I have to buy my groceries there: I was free.
I was a rebel.
Now, what with those militaristic uniforms and the close-fitting dark red tunics, I can see the workforce is but an army without weapons. They’re slowly being brainwashed ahead of some impending inter-supermarket war. That clothing would hide the blood well, too.

Our only hope lies on Aldi-ron, with the Lidl Alliance.
I don’t know about you, but I’m with the Germans this time …