Sometimes I wish I’d been born twenty years earlier than I was.

Imagine a world where rock ‘n’ roll is breaking just as you’re growing up and The Beatles emerge for your sixteenth birthday.
Imagine a world of full employment.
Imagine being able to pick a career, try it out and then pick another the very next day.
Imagine England winning the World Cup.
Imagine paying for things with a twelve-sided coin.
Imagine never having it so good …

Well, we did once and I missed it all.

England have never and will never win the World Cup in my lifetime.
These days, you’re lucky to have a job, let alone a career.
You can’t buy anything much with a coin anymore although rock ‘n’ roll is still cool, even if Paul McCartney isn’t.

I always felt sorry for Macca.
If he’d been murdered instead of John Lennon, Live and Let Die would’ve become an anthem for peace.
Imagine that.
It isn’t hard to do …

I’m sorry John, but your vision for a world living in harmony is probably further away than ever now. There was an article in The Independent the other day explaining that only eleven countries on the planet were not involved in a conflict at the time of writing.

Let’s put that in context, shall we ?
In a parallel, bizarre universe, there’s a hit show on Klingon TV in which the humans are the baddies … the crazy, warrior race that scares the bejesus out of the rest of the universe.
Kirk stomps around starting fights with anyone he comes across and the rest of his crew wear their battle scars with pride.
Also, over in bizarro-world, Paul Gascoigne is a successful health guru with a long-running show of his own, as well as the obligatory range of nutritional supplements and organic pasta sauces. He grew his empire after retiring from a glittering football career that saw him win Serie A and the European Cup with Lazio and the World Cup for England when he captained the side to victory at USA 1994, scoring a hat-trick against Germany in the final.
Meanwhile, Israel, Palestine and all the surrounding republics, kingdoms and sheikdoms have merged into a new Eurasian super-state known as Surisdaq, where people of all races and religions live alongside each other in peace. The main worry for the fledgling nation is whether or not they’ll be accepted into the Eurovision Song Contest, given their tricky geographical location. 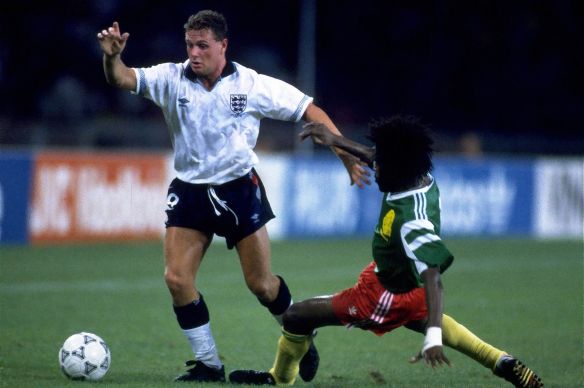 Back in the real world, I guess it’s something of a relief to be seeing poor old Gazza on the front pages again rather than something even more sinister. Looking every inch the octogenarian, the 47-year old was rumoured to have signed on for a Bournemouth Sunday league side earlier this week, but I can’t believe it looking at him now.
Over in America, events in Ferguson are in danger of escalating out of hand, while something similar must be bubbling under the surface back in Blighty, especially if they ever release the name and birthplace of the ISIS member who beheaded James Foley.
UKIP and the BNP will have a field day if it’s someone from Oldham …

A few months ago, I wrote about feeling guilty for not paying enough attention to the news.
I actually made a conscious effort to do so afterwards, but I’m starting to feel guilty again now, although for an entirely different reason.
I do care. I do worry. But what can any of us do ?
Is there ever going to come a point when society itself rebels and says “NO MORE!”
We go to war over oil.
We don’t pay ransoms because we don’t want to fall out with middle-east countries in case they cut off that oil.
We rely on fuel companies to help run our economies.
Yet we have the technology to use other energy sources.

It’s like the long-life lightbulb.
We could’ve used them decades ago but they were held back until enough environmentalists kicked up a storm …
Is that what we’re going to have to do ?
Take control of the streets and demand fairer taxation, greener fuels and an end to corporate and political corruption.
How will we get anywhere to protest ? Petrol’s so expensive and don’t even get me started on train ticket prices …
Maybe we should stay at home and have a sit-in.
Oh no, wait … that’s what most of us are doing every day anyway.
When was the last time you went out in the evening ?
Our pubs are closing faster than ever.

This isn’t the way it’s meant to be.
In the late 50s, everyone thought we’d be getting to our full employment job in a hover car or by jet-pack. We’d come home to an immaculate house to a dinner lovingly prepared by a robot maid/butler and we’d all holiday on the moon. Whatever happened to the future anyway ?

I got talking to a slightly off-the-wall American woman a few years ago who was trying to convince me that the governments of the world are in league with aliens and have been slowly doping us since the 60s. Apparently, every airliner leaves a trail of sedative gas as it flies around the world, so next time you look up at one of those pretty vapour trails, hold your breath …
I dismissed her and her crackpot conspiracy theories as mad at the time but I seriously wouldn’t put it past a modern government to try something like that, would you ?

Or, failing that just dive into a bottle and never come out ?
I’ve got a horrible feeling that Gazza will be joining George Best at the bar before too long …