A long time ago in a cinema not so far away I sat down to watch the first Star Wars movie.
As my ten-year old self fidgeted through various adverts for Spangles and the Taj Mahal curry house, the lights finally flickered into blackness and a hush descended upon the packed auditorium.
The screen was lit with a backdrop of stars .. thousands of stars .. people started cheering .. everyone else was wired too, so eager to see this film everyone had been raving about.
Then a giant burger floated across the screen.
In the single most genius piece of advertising I’ve ever seen, Wimpy pushed their latest creation onto a gullible audience of rapt kids and quizzical adults.
Then the movie started and the rest is history ..

Nearly forty years later and here I am again, in another rammed cinema, this time with people in costume. Angry people. People who feared they might not get to their seats in time, it’s that busy ..
At half past midnight we finally hear that familiar, soaring blast of the main theme and so it begins … 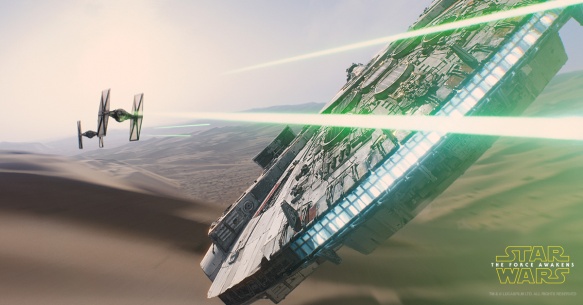 The Force Awakens works on three levels.
Firstly, it’s an homage to the original series of movies.
Secondly, it’s the perfect introduction to the Star Wars universe for anyone who may have been on Dagobar for the last few decades.
Thirdly, it’s a story in its own right that picks up some thirty years after Return Of The Jedi left off, with Vadar and the emperor dead, the empire crumbling and Luke Skywalker as the last of the Jedi knights.
Now there’s a new threat (The First Order) and a new rebellion (The Resistance), both looking for Luke, who for many – like the force itself – is nothing but a myth.

The rest of the plot revolves around a droid with the key piece of a map in its memory, a massive new planet-threatening super-weapon, some new helmet-wearing bad guys, a storm-trooper turned good guy, the return of the Millennium Falcon and its original crew, and lots and lots of different – but strangely familiar – locations.
There’s a desert planet, an ice planet, a jungle planet, a death star, some X-Wing vs Tie Fighter battles, some weird and wacky scenes in a cosmopolitan bar, some mind tricks .. and so the list goes on.
Out with the old and in with the .. er ..
Anyway, it works. We get it.
In the same way JJ Abrams crammed as much feel-good stuff into the first of the Star Trek reboots, so I get the impression he’s trying to show us he’s a big fan and he cares about the franchise. He wants us to smile knowingly and laugh at some of the injokes.
He wants us to feel like we’ve been through a similar plot before.
In essence, he wants us to kick back, relax and feel at home in his version of Star Wars.

The story itself is actually ridiculously derivative.
It’s like the original three movies melded into one, along with huge dollops of George Lucas’ inspiration thrown in for good measure. The parallels with Lord Of The Rings are ludicrous at times and there are many scenes in which you could be forgiven for thinking you’re watching the wrong film.
There’s also the usual second world war imagery along with a slightly-lisping Hitler character. Incidentally, he’s one of the funniest things about the movie but then there’s a lot of wit throughout The Force Awakens, a lot of it being channelled through Chewback I’m happy to report.

I feel like I know this film inside out already even though I’ve only seen it once … but I love it.

The fan-boy in me can suspend all my misgivings about the actual plot and just watch in awe at how beautiful everything is, how superbly realistic the dialogue and characterisation is, how well the chemistry works between everyone, how utterly believable it is, as if Jedi came out last summer …
The force is strong in this one.