Being one of the biggest movie stars on the planet means you can pick and choose when you work and control the direction your career will take. Tom Cruise, George Clooney and Tom Hanks have been in that Hollywood elite for years now and have made countless successful movies during that time.
Bradley Cooper and Robert DeNiro – along with Johnny Depp – have been less consistent despite also being part of the select few.
Note that all the names mentioned so far have been men …
Jennifer Lawrence is almost in the same league and possibly set to break through that infamous glass ceiling. There’s been a lot of talk this year about the disparity between what male and female stars earn, especially given their relative value at the box office.
A recent survey saw Lawrence and Scarlett Johannson at the top of the budget/return ratio (money spent producing a movie vs. revenue from ticket sales and merchandise) while poor old Johnny languishes at the bottom of the league following a series of financial flops, including the critically acclaimed Black Mass.

So which way is she going ?
Well, overall the trend is upwards. The Hunger Games movies have been hugely successful and though she’s set to turn her back on the teenage sci-fi series, her star is definitely in the ascendancy.

And yet it’s not been plain sailing. Serena – also starring Bradley Cooper – was a big disappointment, though American Hustle – yet again, starring you know who – was at least a critical success, if not so much so at the box office.

Which brings us to Joy.
A feminist picture before feminism really took off ?
Maybe.
Or is that just the modern take on it, given the recent debates about how Hollywood itself is still as sexist as ever ?

It tells the tale of the working class gal made good, one Joy Mangano, who was forced to stay at home just as she was about to leave for college. Her dreams dashed and her ambitions shelved, she found herself working in a dead-end job for minimum wage, with a broken marriage and the entire family depending on her. And this was all in the mid-70s, when men were supposed to be the bread-winners, remember ?
Well, so far, so American nightmare.

She then has her “Eureka!” moment and creates the Miracle Mop and goes on to make millions … 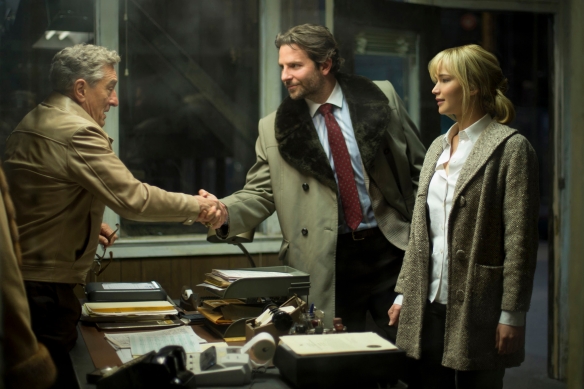 Of course it’s not as simple as that.
The road was long and twisting and she took many a wrong turn and was led astray by both her own family and outsiders at various points. This is no fairy tale and Joy is no angel.
What she was though was one tough cookie and a determined woman who believed in her product and herself and was actually spurred on by the dreamer husband, the soap-watching mother, the philandering father and the dilapidated house they all shared.
For some, they’d be excuses.
For Joy, they were the reason.

The story is chaotic.
There’s a lot of characters and a lot of individual plotlines running through, across, around and alongside each other, but Joy is the one common thread that ties them all together.
The film is chaotic too.
At first, it seemed like one of those rare American black comedies that come along about once a decade to remind us that Hollywood isn’t just about sitcom remakes and Will Ferrell. There were genuine laughs in the opening twenty minutes, with DeNiro hamming it up as another relationship bites the dust, forcing him to move back into the familial home.
The script is witty and fast and everyone plays their part setting up what could become a cult classic. Think Royal Tenenbaums meets As Good As It Gets.
About half an hour in, the movie takes a bleak turn as the grim reality of Joy’s situation becomes apparent and the film itself also becomes darker and more serious, like someone turned off the “comedy” setting and hit “drama” instead.
It really is like two different stories altogether and whatever wit and warmth there was in the first section dries up leaving a miserable husk, bereft of any humanity.
From then on, as our heroine meets the producer of one of the first shopping channels, Joy turns into a generically bland biopic more akin to the average TV movie than anything starring some of Hollywood’s finest. 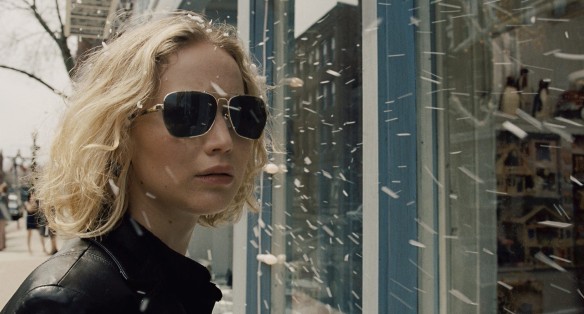 I can’t quite put my finger on what happened.
Why did it go from being a zippy, fun, knowingly dark comedy one moment and then a slushy, sisters-are-doing-it-for-themselves backslapper the next ?

It could’ve been a really clever vehicle for feminism, slyly digging at men in the seventies – stereotypes no less ridiculous than those of, say, Miss World which was at its height at the time – and yet it slipped back into lazy cliché …

Joy is an opportunity missed and a big disappointment as a result.
While the mops may well be miraculous, the movie is just messy.