I’m not a big Tarantino fan, let’s get that out of the way from the start.
I never rated Pulp Fiction and I only thought Reservoir Dogs was okay.
Style over substance, I always thought … until I saw Inglourious Basterds then it kinda clicked. Django was good too, so I was pleased to hear his latest creation would be set in a similar period at least …

There’s been a bit of a hoo-haa about its release following a legal wrangle over which week it would make its debut in the States. Apparently, some independent thing called Star Something Or Other had usurped the agreed weekend opening in December.
Then, a whole handful of big movie screeners – they’re the DVD copies that are sent out for review – were pirated and released on the internet, which meant a lot of people will see it ahead of time anyway. Now, in the UK at least, one of the cinema chains has failed to reach an agreement with the distributor meaning it’ll have a relatively limited release over here anyway.
All in all, things are not looking good for Eight.

.. which really is a shame because this is without question Tarantino’s most beautiful and intriguing movie to date.
The cinematography is breathtaking : never before has a snowy landscape looked so stunning.
The plot is riveting : it’s a whodunnit writ large with multiple “its” as well as “whos”.
The acting is flawless : this bunch must be getting used to each other by now.
The script is razor-sharp : Tim Roth alone gets a whole bunch of great one-liners, especially when switching from toff to cockney … but I’m getting ahead of myself.
The stylization of the movie is as QT as ever : quirky fonts and old-fashioned black cards to introduce each act as in an old Charlie Chaplin flick – ” Chapter One – Last Stage to Red Rock “ – clash wonderfully with the glorious 70mm photography.
For a Tarantino film, there’s a relatively sparse use of music, but what there is is very carefully considered indeed. Ennio Morricone wrote a lot of the score, lending it a sense of gravitas straight from the opening credits – which themselves are a work of art, by the way … 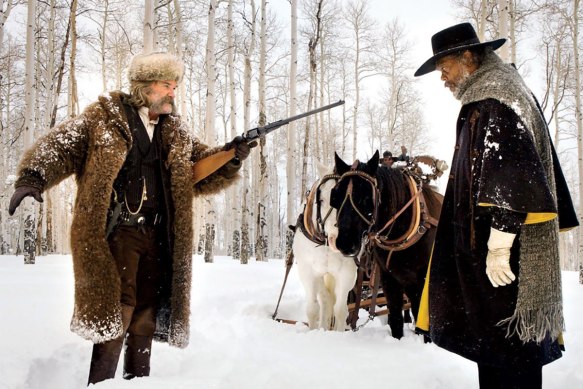 The story revolves around two bounty hunters – Russell and Jackson – who end up travelling across Wyoming just as a blizzard breaks. One is in a nice, cosy stagecoach : the other is about to die in the frozen wasteland if he doesn’t find shelter. Push comes to shove and after some verbal sparring they eventually make an uneasy truce and agree to travel together to the nearest stop – a “haberdashery” – before pushing on for the town of Red Rock when the weather eases up.
They both have substantial bounty with them – in Russell’s case, a real live(wire) woman in the form of Ms Leigh, worth some $10,000 to his character, The Hangman, while Jackson’s Major Warren’s take the shape of three dead bodies lashed to the top of the carriage, worth eight thousand between them.
The pact they make, as mutually respectful men in the same profession, revolves around them protecting each other and their respective assets till Red Rock .. which could be three or four days away, depending on the storm.

When they eventually reach Minnie’s Haberdashery – a kind of olde worlde truckstop – they find there’s been a few changes to the place, which immediately raises their suspicions. The people inhabiting the place don’t help matters, either .. and the tensions of the Civil War, the wild west itself and of weary travellers alighting in unfamiliar circumstances all set the alarm bells ringing … for every one of the eight.
The snowstorm soon sets in ramping up the tension, and pretty soon we realise we’re about to witness what would make an excellent dramatic play, given that everything that happens after the initial set-up takes place in one room and with only a handful of characters …

And that, I’m afraid, is all I am willing to say about the plot.
Anything else would be giving it away …

The story is highly original and very cleverly executed and firmly in the milieu of the murder mystery, despite the glaring lack of a murder to kick things off. At least not initially, anyway.
There are various clues to be picked up and some subtle nuances and changes of backstory and contradictory statements to test whether you – or the characters – were paying attention all the way through. Some of the protagonists will see you switch sides halfway through – you go from disliking to liking and from hating to rooting for them – and everything rattles along nicely, despite a lengthy three-hours run-time. You really don’t notice it takes that long, the plot is so well-paced.
There’s some real stereotypes in here, too – a Mexican, some ex-slaves, a defeated general, a posh Englishman, a rough cowboy … all of them thrown into Minnie’s melting pot – she does make a good stew, you know ?

Oh, and I’d definitely recommend a hot drink for this movie. Possibly even a flask, if you can sneak one in. You’ll thank me for it, believe me. It just looks so bloody cold all the time … 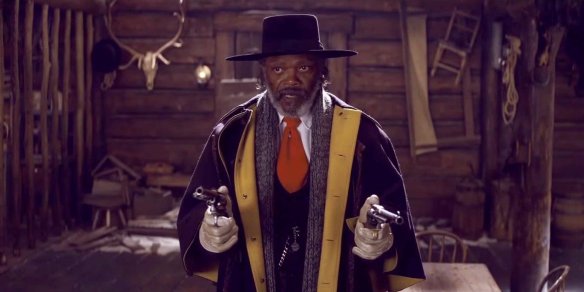 I can’t wait to talk to someone else who’s actually seen The Hateful Eight, such was the impression it made on me, but unfortunately there’s not that many of us yet …

In essence, it’s a film out of time and all the better for it.
It’s traditional, it’s formulaic, yet it’s also very creative and beautiful despite the harsh landscape and even harsher characters. It’s contradictory, like so much of Tarantino’s work. But like I said earlier, it’s his best movie yet and it deserves a wider audience.