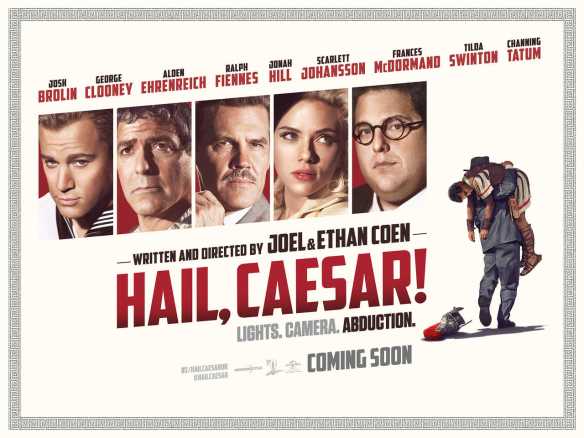 Harking back to the halcyon days of yore is something Joel and Ethan Coen do better than just about anybody and their back catalogue is highly impressive.
O Brother Where Are Thou ?, The Man Who Wasn’t There and the underrated Barton Fink are all excellent entertainment but also classic examples of sepia-toned retrospective pictures that perfectly capture a bygone age with just the right level of meticulous accuracy.
For an old black and white movie fan like me, the release of a new film from the brothers is always eagerly anticipated, so I had high hopes for Hail Caesar, especially after being impressed by the script they wrote for last year’s superb Bridge Of Spies. 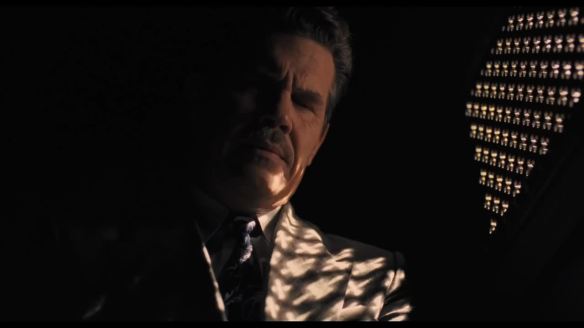 The story centres on a day (and a bit) in the life of studio “fixer” Eddie Mannix, played absolutely straight by Josh Brolin in one of his finest performances to date. A brusque, business-like guy with a “can do” attitude, Mannix is feared and admired by his colleagues – including the great and the good of the silver screen – but also coveted by aircraft manufacturer Lockheed, such is his reputation for getting things done.
His day begins and ends in the confessional as he surprisingly sweats the small stuff – lying to his wife about smoking, mostly – but it’s that same attention to detail that’s got him where he is, the minutiae of the studio consuming his every waking hour.
With several movies in production, he’s adept at plate-spinning, handling the media and massaging the egos of both the acting talent under his care and his own bosses breathing down his neck every morning at 8am sharp.
Once in a while, however, one of those plates will wobble and that’s when Mannix steps it up a gear, pulling out the stops to keep it from crashing to the floor.

And yet .. crash to the floor it does. Or rather, he does .. in the form of George Clooney’s Baird Whitlock – in essence, a fifties version of himself.
Notable drunkard and womaniser Whitlock frequently finds himself not so much falling off the wagon as much as leaping from it with his arms wide open, right into the loving embrace of a bottle or a woman .. or both.
This time, however, the story is slightly different because for once the biggest star in Hollywood isn’t missing because he’s on another bender : this time, he’s been kidnapped.

Meanwhile, a starlet’s unmarried pregnancy is becoming a liability, a non-speaking cowboy singer is forced to stand in for the lead in a serious drama, the gossip columnists are smelling a rat – and a red one at that, this being the peak of McCarthyism – and there’s still the matter of the life-changing job offer from one of the biggest up-and-coming companies on the planet.

The plot doesn’t unfold, it kind of erupts in the first twenty minutes and from then on you’re in the thick of it, the studio system writ large, the threat of television just round the corner, the space race, the cold war, commies under the bed, is smoking bad for you, should we make another musical, what about the mermaid not being able to fit into her costume in another week or so ..?

As ever, the comedy is dry and constant rather than sporadic and explosive and there are lots of inside jokes and knowing references made to the golden age, though many of the characters really did exist and a lot of these things actually happened .. just not in the same way or to those people necessarily. Like most American “historical” films, we shouldn’t worry about the facts getting in the way of a good story.

But the question remains : is it a good story ?
On the face of it I’m afraid the answer is no.
In fact, the plot itself seems more like a vehicle to shoe-horn in as many of those old yarns as possible as well as being a great way to showcase some major names of today’s cinema. If you add up the actual screen time for Johansson, Fiennes, Swinton, Tatum and even Clooney himself, I would estimate it to be about twenty five minutes in total.
Hail Caesar ! is disjointed and patchy and feels more like a series of skits than a well-massaged plotline, but it’s still an entertaining watch and it will make you laugh.

If you’re a fan of the Coens you should definitely see it. Likewise if you love old movies.
If you want to see it for any one of the stars, unless it’s Brolin you may end up disappointed even though they all offer strong performances, Clooney and Tatum in particular both camping it up to great effect.