With the intriguing and highly original idea of using actual accounts from the 17th century to form the basis of the plot, The Witch can probably best be described as the world’s earliest found footage horror movie.

The film begins rather abruptly in 1630, in a village courtroom in New England as Lancashire father, William, is cast out along with his family for what can best be described as “religious differences”. Not long arrived from the old country, as the plot develops you can only imagine that Will was a little too passionate about his beliefs, so strict is the familial bond to the bible. Whatever the reason, they’re banished from the settlement and forced to make a new life however they can .. and this being a horror story, that means moving next to the nearest spooky forest and trying to farm a small clearing there.
Toiling day and night to produce a rancid harvest of corn, with three goats, a teenage girl, a lad of nine, two younger twins and a baby still suckling, the family unit is under strain to survive from the off. The soil’s not good, the weather isn’t great, and the whole place just feels … damned, might be the best word.

Ever the optimist, Will and the gang thank the lord for all they have been blessed with and count themselves lucky to have “never lost a child”. They read from the good book every day and work like dogs to wring out some kind of happiness from their sorry situation. Eldest child, Thomasina – played with just the right balance of intensity and pluck by the excellent Taylor-Joy – is an integral part of the workforce along with her younger brother, Caleb, a serious and grave young man. With their father and mother, they try their best but the crop is as poor as their prospects.
Forbidden to enter the woods, the children play alongside them and tease each other with songs and stories about the devil. The fact they have a jet black, horned billy goat only adds to the irony as the twins gaily skip around the crud-infested yard, singing about Lucifer …

Desperate for food, the relentlessly upbeat Will sets traps in an attempt to put some meat on the family table as a rather large, rather fearless rabbit continues to taunt him from the edges of the forest. Something is amiss. Something feels wrong in this bleak corner of America. But you can’t quite put your warty, crooked old finger on what … 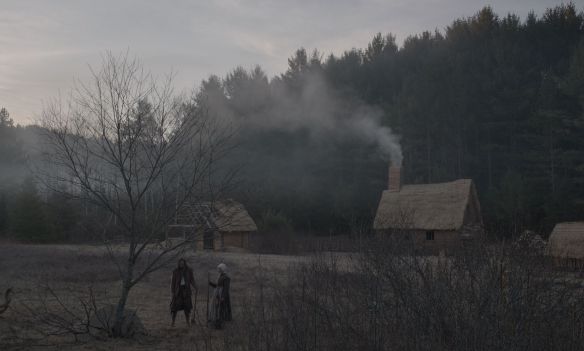 Here endeth all talk of ye olde plotline. Thou must seeth with thine own eyes.
Did I mention the dialogue ? It’s all in the period tongue, which actually sounds a lot like northern English to me, with plenty of thous, thees, hithers and thithers and a smattering of didsts, sayests and willsts along the way. It’s all perfectly understandable so don’t worry if you’re not into Shakespeare or Chaucer, plus this isn’t really a movie laden with speech.
It’s a taught, tense tale of terror and trying times and doesn’t need fancy words to get the message across.

It is shocking.
It is scary.
It is, all the same, very real.

The film asks a lot of questions about the time, about religion, about witchcraft and certainly about satanism, yet it leaves most of them unanswered and for that I highly recommend seeing it with at least one other person. It’s definitely a good movie to talk about afterwards, so perhaps an early evening showing and then a trip to the pub is to be recommended … especially if you don’t want to have nightmares.

I thoroughly enjoyed The Witch.
If you thought the horror genre was tired and approaching saturation point, think again.
There’s no shakey-cam, no hack and slash, no jokey jumps and absolutely no cheap thrills in this movie.
It’s a bona fide bone-chiller.

Thou hast been warn-ed, good people.